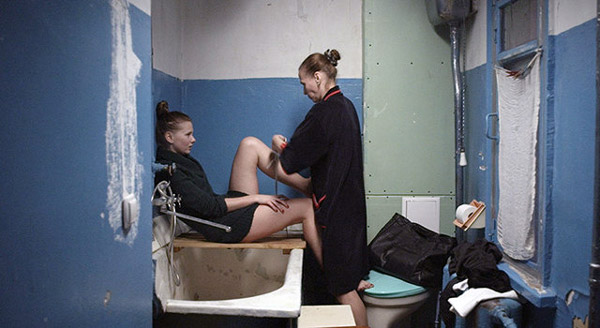 The Tribe begins with an explanation: “This film is in sign language. There are no translations, no subtitles and no voice over.” That we will generally comprehend what is happening in the film is supposed to ease any resistance we might feel to spending 132 minutes watching people communicate with one another without knowing what they are saying. And we do get the gist: a young man named Sergei (Grigoriy Fesenko) is a newcomer to a school for the deaf, where he’s initiated into an insular and depraved world of criminal activity involving everything from forcing elementary schoolers to sell trinkets to human trafficking. Sergei is put in charge of pimping out his female peers at a nearby truck stop. He falls in love with one of them, a young woman named Anya (Yana Novikova) who approaches her job with unlikely cheer. Disaster ensues. We see a lengthy real-time abortion that is supposed to be extra harrowing because the woman cannot give voice to her pain, and there is a lot of head-bashing.

Not only does director Myroslav Slaboshpytsky decline to provide subtitles, he expressly prohibits distributors from creating subtitles as a contractual condition of all sales. His vehemence begs certain questions. Is the film for the deaf community? Is it meant to help hearing people comprehend the experience of deaf people as they navigate the hearing world? In fact, Slaboshpytsky’s wanted to “make a modern silent film,” explaining that “sign language is like a dance, like ballet, pantomime, Kabuki Theater. However, there‘s nothing grotesque in it—people do communicate that way in reality.” In point of fact, many scholars believe that sign languages have existed for as long as spoken languages. Different countries have different sign languages as they do spoken languages, though they can share linguistic roots just as spoken languages do, and spoken and sign languages are equally rich in variations according to levels of formality, context and local and regional dialects. In short, sign language is language, and its equation with the pantomime of the silent film era is insulting.

The sound design in The Tribe is extraordinarily complex for a “silent film”, and the rustling of clothes, exhalations of breath and other noises made by the actors as they sign are punched up to a heightened degree of gimmickry. Unsurprisingly, the characters’ deafness serves over and over again as a cheap plot device for their impending doom (ie. they never heard it coming). Still, The Tribe is an occasionally riveting piece of aggressively confrontational cinema, potentially interesting as a Ukrainian national allegory and a truly impressive feat of choreography between actors and camera.

That Slaboshpytsky is impressed by sign language’s unique physical expressivity makes sense, but his assumption that we cannot appreciate that special expressivity while also knowing what his characters are saying to each other does not. The deaf characters in The Tribe discuss, argue, fight and cry amongst themselves almost constantly about the brutalizing situations they find themselves in. We are witness to their brutalization without the benefit of knowing what they make of it, and it’s a distinctly grim and voyeuristic experience.