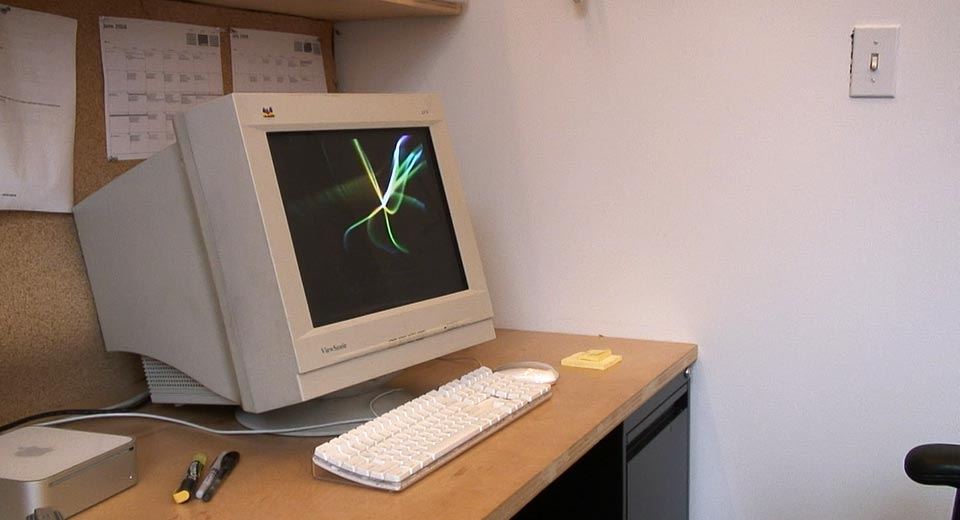 Trevor Shimizu most often represents himself as a painter, but his work in video – humorous, haunting, and slightly uncomfortable – betrays the bountiful influence of years of television and internet gazing, combined with art schooling. Also influential is his tenure as the former Technical Director of Electronic Arts Intermix (EAI), which will be hosting a special evening of schmoozing and Shimizu art touring in its office space, from 6:30-8:30. Visitors are invited to sip wine and rove through EAI's program and office space, to view installed video works that take the context into careful consideration.

A Scientology video, for instance, will show in the private viewing room, and a sweet music video about awkward intern love will play on the intern station computer. In the technical suite, a monitor will display an 840-minute compilation from an adult pay-per-view channel, as homage to the not-infrequent appearance of nude bodies and suggestive situations in works by Vito Acconci, Paul McCarthy, and Alex Bag. This is also a space in which Shimizu edited and became friends with such artists as Dan Graham, Carolee Schneemann, and Shigeko Kubota, and honed some of his thinking about the role of the artist in society, especially with respect to media and popular culture.

Other works more directly relate to the semi-autobiographical, semi-humiliating strain in Shimizu's paintings, calling to mind Larry David's Curb Your Enthusiasm or Danny McBride's Eastbound & Down. Each of these resonates intriguingly with Shimizu's consideration of himself as a father, an artist, and an Asian American man.

The evening will culminate with a single screening of What a Boring and Disappointing Life (2001), a portrait of the artist as a young man, suffering through a tenuous living situation in San Francisco: "…Unable to sustain a long-distance relationship, I took a job as a tele-fundraiser for the San Francisco Philharmonic Baroque Orchestra to get away from the apartment and possibly meet someone outside of my social circle. The office was only a few blocks away, so I would often take long walks around Polk Street night. Each night, I returned to this beautiful apartment alone. The apartment, unfortunately, had a terrible mosquito problem. They lived in the planter boxes outside. I realized much too late that they were getting in through a large gap under my front door. I realized this after several nights."