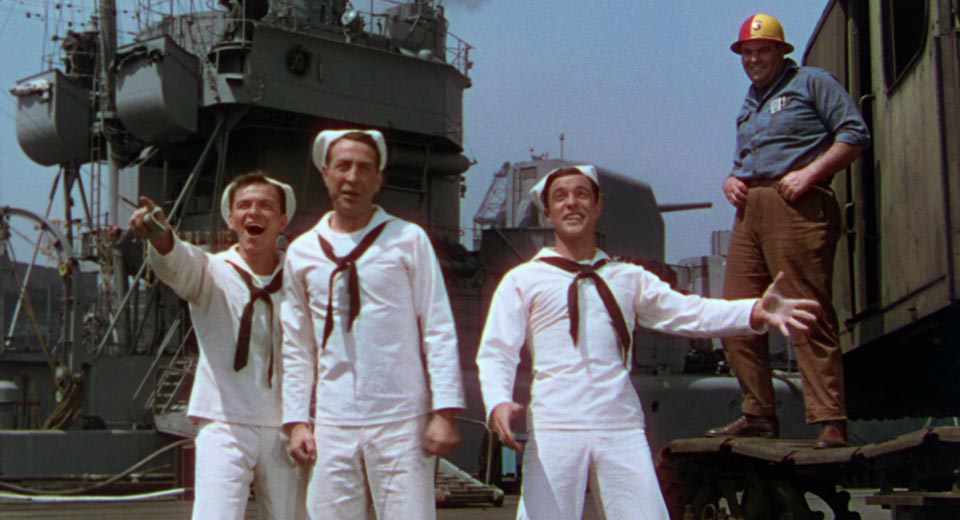 Is On the Town responsible for America’s post-WWII baby boom? A cursory Google search yields some paltry results, but Stanley Donen and Gene Kelly’s 1949 toe-tapper has enough man candy to make any war bride quiver. Take a book and lyrics by Singin’ in the Rain team Comden and Green, add a few hundred thousand returning GOBs and GIs, sprinkle with the dulcet crooning style of Ol’ Blue Eyes, and what have you got? Good, old-fashioned American whoopie, in blushing Technicolor!

While America’s boys are overseas giving Adolph and Bennie the what-for, three lucky sailors—bobby-sox idol Frank Sinatra, co-director Gene Kelly, and swarthy everyman Jules Munshin—are let loose on an unsuspecting New York City for a 24-hour furlough. Their relatively tame itinerary of sightseeing and hotdog scarfing is quickly sabotaged by Kelly’s Gabey, who falls in “love-at-first-sign” with a poster of New York Subway beauty queen "Miss Turnstiles." Despite knowing absolutely nothing about this woman, Gabey is undeterred—one look at those lengthy gams and the game is afoot!

With Gabey on the trail of his “IRL” IRT dream girl, shrinking violet Chip (a convincingly virginal Sinatra) and lumpen ensign Ozzie (Munshin, a real “youse guys” guy) are left to fend for themselves, romantically speaking. Daylight's a-wasting, and Cupid finds Chip and Ozzie but quick: with a lusty lady cab driver (pre-“Laverne and Shirley” Betty Garrett) and a spunky anthropologist (Ann Miller), respectively. Now that our goofy foils are successfully paired off, things kicks into high gear, following Gabey on a crosstown caper in search of the elusive transit beauty (Vera-Ellen, what a name!).

A neat little story, predictable in parts, still manages to slyly toe the line between wholesome Broadway razzle-dazzle and ribald fun. The iconic opening number (“It’s a helluva…”) affords a rare look at the post-War Brooklyn Navy Yard, one of a half-dozen other tourist traps captured during nine pick-up days on the sidewalks of New York. An added show-stopper, absent from the original 1944 production, pays thirsty homage to “Prehistoric Man,” with triple-threat Ann Miller and Co. making goofy (if problematic) use of priceless Mesoamerican artifacts at an ersatz Natural History Museum. And it just wouldn’t be a Stanley Donen joint without that signature Gene Kelly ballet interlude, building to a Coney Island finale so dense—so kooky—you can smell the salt air and stale beer.

Kelly’s taut tuchus, Frankie’s honeyed pipes, and Munshin’s... earthy quality kept the home fires burning long after V-Day and the Victory Parade. If Commodore Grandpappy hadn’t taken his steady to the pictures sixty-odd years ago, would any of us be handing over our greenbacks at BAMCinematek this afternoon? And so, to our boys uniform, we say "thanks"—and "hubba hubba"!