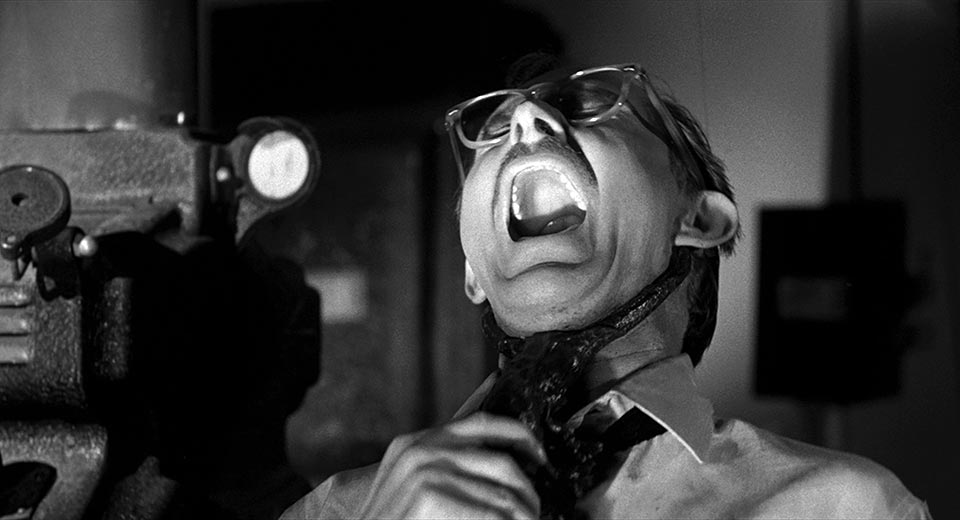 In the annals of horror cinema, The Tingler's reputation is superseded by its promotional gimmick. The great producer-director-showman William Castle was two-for-two with his earlier ploys of offering $1,000 life insurance policies to audience members who might die of fright during Macabre (1958), and then advertising "Emergo" technology, for which a 12-foot plastic skeleton zipped above audiences' heads at the climax of House on Haunted Hill (1959). But the inspiration for his pièce de résistance came to him in a literal lightbulb moment when he shocked himself while changing his overhead kitchen light. According to Castle's autobiography, he darted over to his sleeping wife and giddily shook her awake to describe his masterplan: "I'm going to buzz the asses of everyone in America." By placing joybuzzer-style motors under cinema seats—creating a sensation marketed as "Percepto"—Castle estimated he jolted over 20,000,000 behinds. One belonged to John Waters, who wrote, "As I sat there experiencing the miracle of Percepto, I realized that there could be such a thing as Art in the cinema."

As much as Castle is a central figure in the chronology of expanded cinema, falling between the Lettrists and Fluxus, The Tingler is less noted as a forerunner of psychotropic body horror. Vincent Price plays Dr. Warren Chapin, a pathologist who discovers a parasite attached to the human spine that nourishes on fear, one whose growth is dissipated by the natural reaction of screaming. Chapin theorizes that he can he can study "the tingler" by scaring a host who is unable to release her fright energy through her vocal chords: a deaf-mute woman who sells tickets at the local movie house. Chapin first experiments on himself with the fright-inducing properties of LSD, making what is believed to be its first-ever feature film appearance, then decides to dose his acquaintance. After a number of compound twists—a narrative forte of Castle and screenwriter Robb White's—the title's slimy lobster-centipede creature is on the lam and darting under the seats in one of the great fourth-wall-breaking sequences in all cinema.

To my knowledge, tonight's Halloween screening of The Tingler is the first Percepto-enhanced show since Film Forum's 2013 summer horror series, and before that, their 2010 Castle retrospective. It should be noted, with some regret, that as in 2013, the secondary gimmick of the tingler creature appearing to crawl across the projector and displacing the print, Gremlins 2-style, will be mitigated by digital projection. (Apparently there are only two known complete 35mm prints, and one is in Europe.) Fortunately, your ass can't tell the difference.