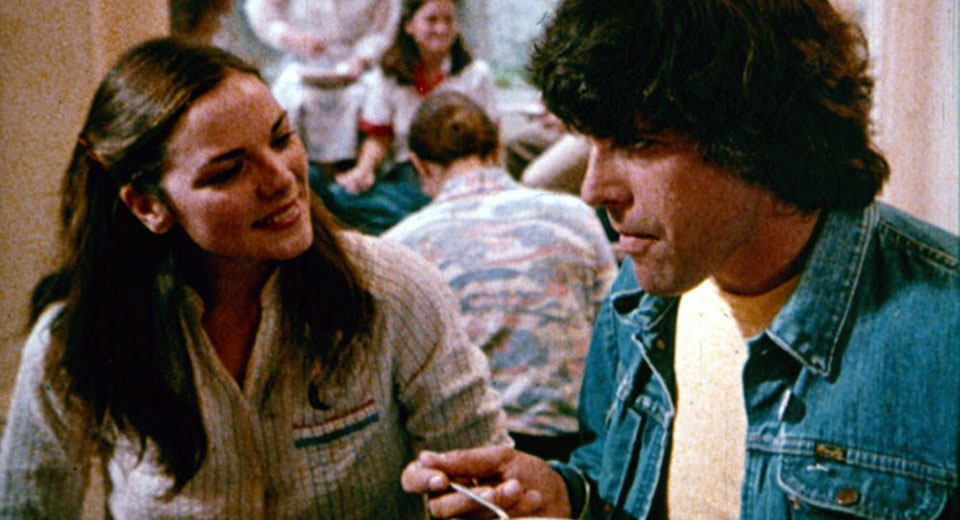 Also today: we have a new interview with Jonas Mekas by Jon Auman.

Tonight Anthology Film Archives is hosting a rare screening of the obscure 1981 Canadian film Ticket to Heaven , a ripped-from-the-headlines drama about the early days of the Unification Church (aka the "Moonies") in the U.S., adapted from the book Moonwebs: Journey into the Mind of a Cult by Josh Freed.

While most depictions of cults in cinema tend to favor the more occult, horror-tinged variety (think Wicker Man or Rosemary’s Baby) or fictionalized cults for psychological thrillers (Martha Marcy May Marlene or Sound of My Voice), Ticket to Heaven is unusual in that it seeks to portray an actual cult with a considerable amount of realism and sincerity, mostly forgoing the opportunity to over-exploit the material’s more sensationalist aspects for gasps or cheap laughs. (That being said, there are plenty of opportunities for both reactions, particularly when confronted with the insidious giddiness of a Moonie recruiter played by a young Kim Cattrall.)

Ticket to Heaven does not explicitly name the Unification Church or its founder Sun Myung Moon (most likely in fear of a lawsuit), but it does very little to hide its identity. In fact, the film is full of accurate details taken straight from Freed’s first-hand experience, second-hand accounts, and considerable research. (Many an ex-Moonie will shudder to hear “Red, Red Robin” sung as a wake-up song.) Essentially, only the name of the cult and the names of those involved with this particular story changed for the film.

Attempting to show multiple perspectives throughout its narrative, the film is split into three distinct sections: first, the gradual process of indoctrination into a cult by a young man named David (Nick Mancuso) through a recruiting center in Berkeley, California; second, the reaction of David’s friends and family—primarily his friend Larry (Saul Rubinek), who is more-or-less Freed’s stand-in—and their attempt to rescue him; and third, David's deprogramming by an ex-cult member.

The depiction of the process of indoctrination is perhaps where the film best succeeds. David’s transformation from a slightly depressed, aimless young man to a full-blown zealot is experienced step-by-step—starting with light flirtation, cheery singing, group activities, and lectures and ending with complete self-denial, crazed chanting, and the selling of flowers out of a van to strangers on the street (for which the Moonies were infamous). To its credit, the film avoids mentioning any specific theological arguments in David's process, showing instead how brainwashing occurs through creating a constant sense of guilt, group dependency, self-denial and isolation from rest of the world, among other things. (Conversely, this is also a weakness of the deprogramming section, which relies heavily on logical reasoning to break David.)

The film is not without it’s flaws—it is often burdened by formal clunkiness, occasionally falls prey to hyperbole, and fizzles out with a rather flat final act—but, as someone who grew up in the Unification Church, I find it valuable as a unique source of representation for those of us who managed to break away from a toxic life as cult members. That being said, watching it can still be stressful as hell.