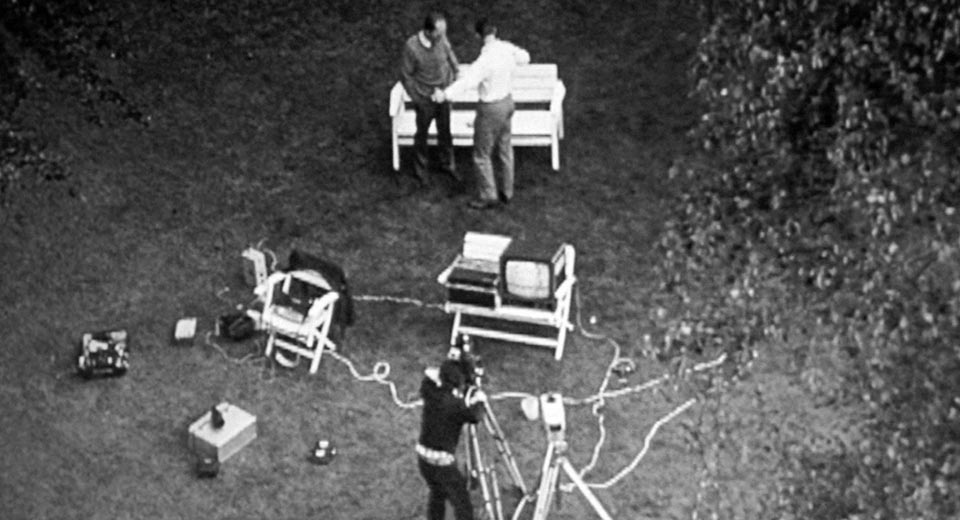 On an idyllic park bench sits a colossus of modern literature. It is Thomas Bernhard, author and playwright, who, since his death in 1989, has grown in international literary stature to the point of his canonization beside Samuel Beckett and Franz Kafka as one of the masters of a particularly European form of 20th-century despair. He is dressed for the part: pressed shirt, slacks, leather shoes, a sweater, and a woolen jacket draped over his shoulders. Then he speaks. What Bernhard says—stories about a childhood infected by the remnants of war, the desire for loneliness, the absurdity of all in the face of death—is precisely what anyone familiar with his literary reputation would expect him to say when confronted with a camera.

But these opening scenes from Ferry Radax's 1970 "portrait" Thomas Bernhard - Three Days, are only an introduction to the image of the controversial public figure—dressed and speaking like a controversial public figure—named Thomas Bernhard. Quickly this image begins to dissolve. As Radax punctuates Bernhard's autobiographical monologue with fades-to-black and constantly shifting, obtuse camera angles, what seems at first like a carefully designed self-presentation of Bernhard as the "gloomy" prose genius, becomes something far more experimental. The camera cuts to capture images of the crew setting up lights, changing film reels, and there is Bernhard watching them, smiling, even watching a soccer match on the TV monitor that otherwise is used to self-reflexively watch Bernhard monologize in real-time.

Throughout all of this Bernhard keeps talking. He outlines his melancholy, his obsessions, his heroes. But there is a sense that his frankness is contingent on his collaboration in how the film plays with his own high-cultural image. In one scene the writer glances down at his shoes and says, "Well, I am considered to be a so-called serious writer like Bela Bartok is a serious composer, and the reputation spreads... Actually this is a very bad reputation." When we then see Bernhard smiling, laughing, and adjusting his microphone it is impossible not to think of Andy Warhol, and how every interview with him was an interview with Warhol the image—as one of any number of complex images.

Like Warhol, Bernhard's instinct was to efface any singular image of himself. The question of what is "real"—who is the "real" Thomas Bernhard?—remains ultimately unknowable. What is left, then, are the books and plays that Bernhard wrote, and documents like Three Days, which exist as as a composite portrait of the artist at play with his own self-creation.