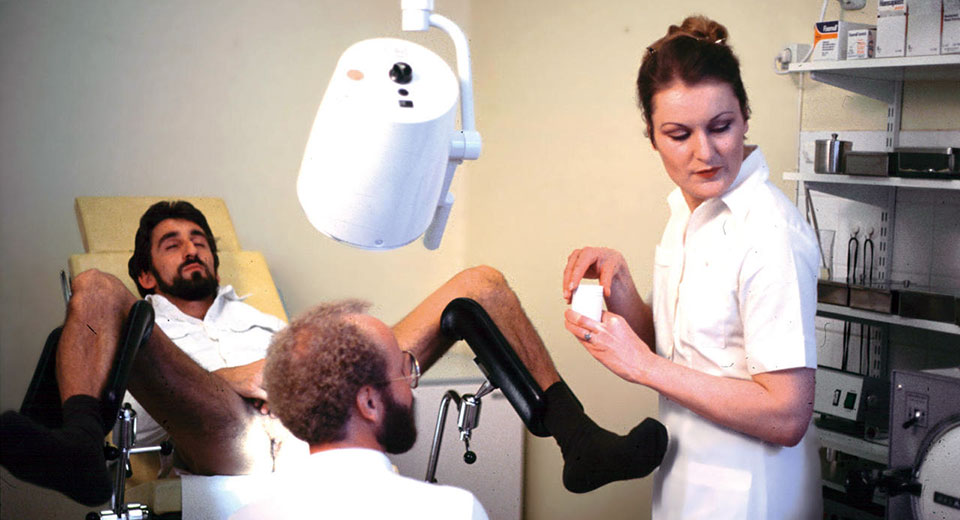 Despite a brief appearance in Fassbinder’s cult classic Querelle (1982), Frank Ripploh is not very well known, and understandably so. His first of only three features, Taxi zum Klo (1983), or Taxi to the Toilet, is a cynical grossout that will leave you asking what drove Ripploh to expose himself in such an abject way. Taxi zum Klo is by no means worthless, but it is an enigma.

Ripploh wrote, directed, and starred in the film, which begins with a roving shot of various posters, buttons, and fliers tacked/taped/stuck with God knows what incidentally adhesive fluid to the wall. One ostensibly political pin perverts The Stranglers’ 1977 album title to “No More Heteros,” while another seemingly sincerely announces “Gays for Socialism.” But as we’ll soon discover, if Ripploh holds any political convictions at all, he holds them loosely and ironically (he skips a Chilean solidarity meeting to go to the baths). In voiceover, Ripploh introduces himself as Peggy, a “neurotic, polymorphically perverse teacher.” (The psychoanalytic concept of “polymorphous perversity” describes a period of a normal child’s psychosexual development during which the correct object “cathexes,” or attachments, have not yet developed.) Since Peggy is a teacher, his infantile sexual (dis-)orientation finds a complement in those of his students on a daily basis (in other words, it’s why he gets along with them so well). A cornerstone of his private entertainment library is a collection of old alarmist educational films about child molesters, which he watches with his transvestite “bosom-buddy” Wally while playing footsie and eating cream puffs. Peggy’s predilections make his life a continuous flirtation with various forms of low-level criminality, even in a relatively permissive society like 1980s Germany.

In a 1981 interview, Ripploh said that an artist’s depiction of sex (which in Taxi zum Klo is literally warts-and-all explicit) “doesn't even have to work or be successful. The important thing is the artist's freedom to do it." This is also Peggy’s position on commitment in relationships, which comes second to his self-assigned right to do whatever he wants. This is one of the more depressing aspects of Peggy’s live-and-let-live attitude, which champions freedom at the expense of trust and dependability.