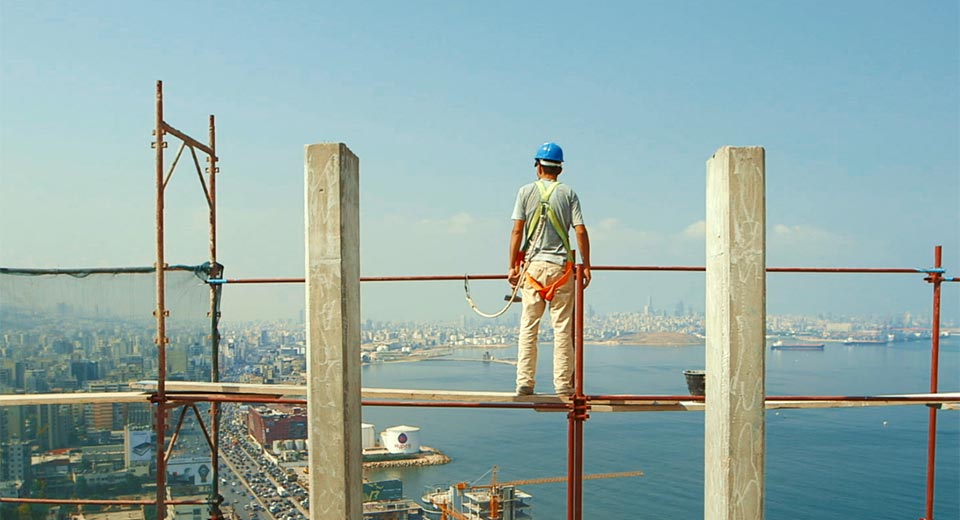 It’s possible to skim a capsule description of Taste of Cement – a documentary portrait of a group of Syrian refugees now building skyscrapers in Lebanon – and guess you’re in for a familiar dose of responsible-citizen medicine (nonfiction’s most frequent prescription). But that assumption would wildly miss the mark in one of the most formally audacious – and politically potent – documentaries of the last year.

Taste of Cement, screening as part of the Museum of Moving Image’s Panorama Europe series, is a work of sensory cinema showcasing remarkable artistry from director Ziad Kalthoum, who himself defected from the Syrian Army in 2013 and fled to work a construction job in Beirut. Set on a construction site that is workplace by day, living quarters by night, Kalthoum structures the film as a series of visual and sonic experiments – including a gauzy underwater military tank scene and what’s perhaps the world’s first cement mixer POV sequence. Melding dreams, memory, and the visceral, unavoidable textures of the present, Taste of Cement eventually arrives at an emotionally shattering, pitch-black flashback to Aleppo that stops the film cold. Throughout, the full-bore sound design merges with musical score and shifts from rhythmic, ear-pounding construction noise to empty silences, as cinematographer Talal Khoury’s camera precariously surveys Beirut from dizzying heights atop a construction crane and follows workers deep into the subterranean cement bowels of the worksite that constitute their curfew-regulated living quarters. TV news footage of the destruction of Syria is reflected in extreme close-up shots of the workers’ irises, the tiny digital buildings of their homeland crumbling soundtracked by the parallel low bass boom of new construction above their basement bunker.

Taste of Cement situates the Syrian refugees within a specific environment, embeds that environment within the body, and laces trauma and displacement through every sense available. The film eschews both interviews and verite dialogue, the men voicing the imprints of expatriation on their bodies through poetic snatches of voiceover monologue: “The moment you start counting floors, your fingerprints vanish.”

We hear a lot about the power of storytelling these days – the power of putting a “human face” on an issue (begging the question of what other kind of face might be possible, but nevermind), a goal that is usually affixed to well-meaning but shallow portraits of foreigners with sound bite-sized hopes and dreams expressed handily to camera. Taste of Cement is a bracing reminder that our lives are carried out in these fragile bodies that we all inhibit, and a film that embraces all of the cinematic tools at its disposal to put and keep us in those bodies, aware of what movement, labor, and fear actually feel like, may be wielding a far more formidable power.