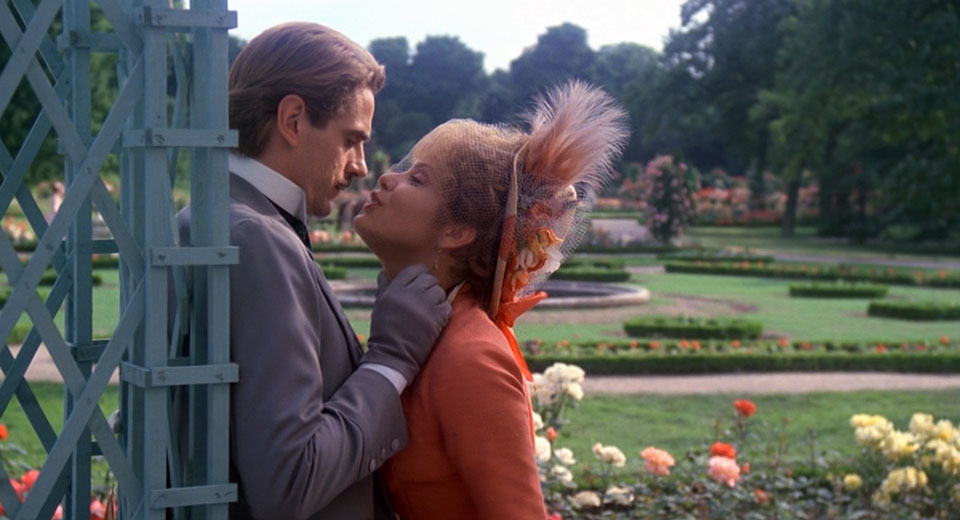 Volker Schlöndorff's filmography is dominated by literary adaptations: works by Robert Musil, Heinrich von Kleist, Marguerite Yourcenar, Günter Grass, and Heinrich Böll. In 1982, when Peter Brook was pulled away to another project, Schlöndorff inherited his eclectic screen treatment of a portion of the notoriously unadaptable Marcel Proust's In Search of Lost Time. Many had tried before him: René Clement in 1964, Francois Truffaut in 1967, and Harold Pinter and Luchino Visconti via Joseph Losey (with rumors of Catherine Deneuve starring as Odette) in 1971. Since the Brooks-Schlöndorff version, some have succeeded in adapting individual volumes of the massive novel: Raúl Ruiz (who finally did use Deneuve) in 1999, and Chantal Akerman in 2000.

More mysterious than all these filmmakers' inability to convert Proust chef d'oeuvre into images is their eagerness to try. Why has it fascinated so many screenwriters and directors, not to mention playwrights and philosophers like Samuel Beckett and Gilles Deleuze and hacks like Alain de Botton and Jonah Lehrer? Is it because Charles Swann is an archetypal aesthete, justifying his existence with his refined literary taste, wardrobe, and collection of art objects? Do intellectuals naturally sympathize with such precious people?

The material Brooks selected for Swann in Love (1984) emphasizes not only Charles Swann's (Jeremy Irons, speaking near-perfect French) narcissistic love for Odette de Crecy (Ornella Muti) but also the moribund boredom permeating their social milieu. Schlöndorff wanted it to be "a film on love and jealousy," and BAM's program notes call it "surprisingly sexy, sumptuous, and lively," but mostly it paints the turn-of-the-century Parisian high bourgeoisie as a zombie class, anemic nihilists longing for eternal rest. Dutchess Oriane (Fanny Ardant) is so bored by everything in her life, from concerts to dinner parties, that she can't imagine any other cure for her ennui but death (although who knows, "Death may be just as boring"!). It’s hard to shake the feeling that if there's a bigger waste of time than these people's idle lives, it's watching them complain about it for two hours.

As with so many other movies about the bourgeoisie, it's much more interesting to watch the working people stuck at the frame's periphery: Swann's butler, François (Marc Arian), being bossed around in his old age, his driver, Rémi (Vincent Martin), having to listen to his endless whining, his nameless barber (Daniel Tarrare) combing his hair as he munches on tartines. The grateful, almost admiring, smile on the prostitute Chloé's (Anne Bennent) face after Swann indifferently tosses her a big bill is heartbreaking. But the big names are in top form too: Alain Delon as the flamboyant Baron Charlus and Ingmar Bergman’s cinematographer Sven Nykvist providing the visual sumptuousness.