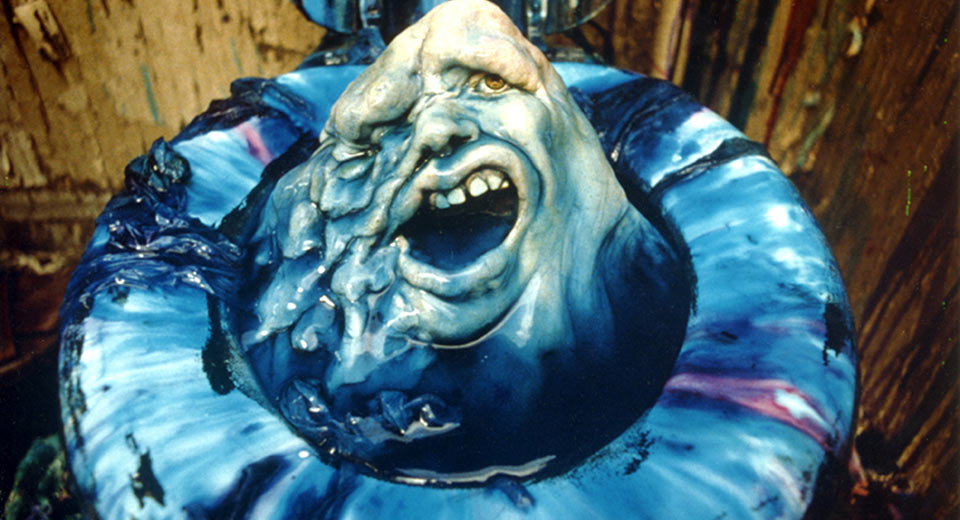 Though he now directs prestige television programs, Jim Muro will likely never top his first and only feature, Street Trash (1987), a surreal shocker set largely in a New York garbage dump. It’s every bit as cocksure in style and tone as Sam Raimi’s original Evil Dead and Peter Jackson’s early pukefests, so why isn’t Muro helming Oscar winners? More importantly, why hasn’t he pumped out a sequel or two to his original masterpiece? Street Trash is as handsome and accomplished as low-budget gore fests get.

The film has survived as a cult item on the strength of recurring scenes involving winos melting into sherbet-colored puddles after a single snort from buck-a-bottle liquor called Viper. These effects, along with a superlatively profane script, fashion a cartoon reality in which misanthropic rants and rotting viscera seem as charming as Elmer Fudd blasting Daffy Duck’s bill sideways. Muro and screenwriter Roy Fumkes bask in the juvenile pleasure of melting boobs and dismembered penises. The film is so nearly sweet in its vulgarity that we find ourselves in on the joke without reservation. It’s not satire, but it also wasn’t made by idiots.

Even greater than glorious, goopy deaths is Muro’s Steadicam work, which lends an uncommon visual sophistication to a subgenre better known for wonky cuts and jittery images. Muro constantly crawls and reels through his world of degenerates in that dreamy weightlessness unique to the Steadicam. His clever mis-en-scene preserves interest between episodes of carnage. He’s since parlayed that mastery into a lengthy career as the Steadicam operator favored by the likes of James Cameron and Oliver Stone. But you’d have to be buzzed on Viper to think he wasn’t meant for better things.