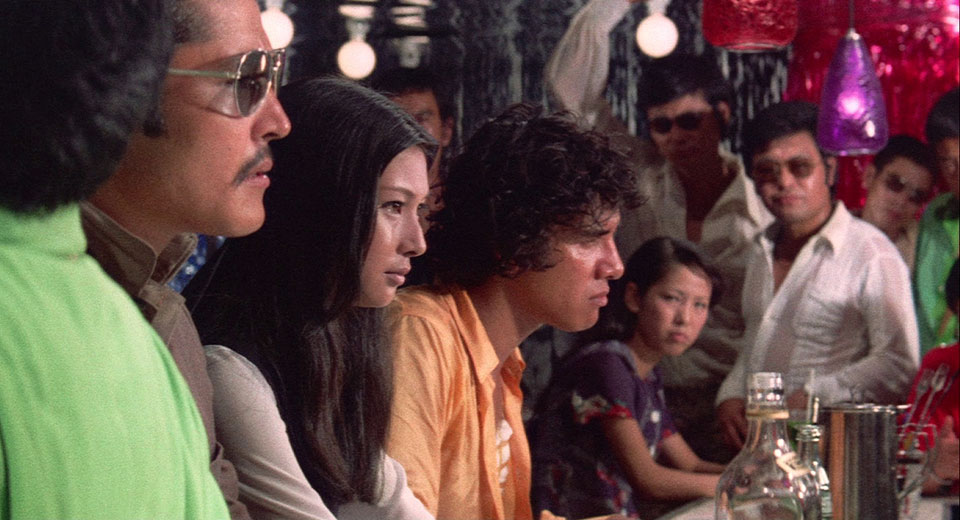 Meiko Kaji isn't a household name in the U.S., but mention her name to a genre film enthusiast, and it's likely their eyes will light up and effusive praise will follow. Kaji is the epitome of cool: her deadpan toughness, blood-soaked revenge films, amazing fashions, and take-no-mess attitude add up to an exploitation legend. Beyond mere coolness lies a talented actress who brings pathos to even her hardest characters. On the occasion of Kaji’s 70th birthday, and as a pre-Valentine’s Day massacre, Japan Society presents a small retrospective of the actress’ best roles from her 70s heyday. While all the films in the series are exceptionally watchable—Lady Snowblood: Love Song of Vengeance and Female Prisoner Scorpion: Beast Stable rank among her best work—tonight’s feature, Stray Cat Rock: Sex Hunter is an underrated, complex portrayal of underworld life and racism in post-war Japan.

Kaji plays Mako, the leader of aimless girl gang the Alleycats. In the opening scene, the Alleycats gossip about sex in the club, hotwire two cars, and drive to a dark field so Mako and Miki, an underling, can knife fight by flashlight. Mako dominates her gang through violence, but Kaji’s sly smiles and protectiveness over the other girls feel like tough love rather than abuse. The Alleycats’ male counterparts, the Eagles, are sexist, violent racists whose rebellion takes the form of assaulting Black Japanese-Americans, the grown children of WWII military personnel. The Eagles’ leader, the Baron, explains his hatred through a sepia-toned flashback, overlaid with blood splatters, of his sister’s rape by a mixed-race Japanese man.  The gang rampage around town in military-style Jeeps, attacking those they assume to have Black American heritage, telling the Alleycats they are “protecting Japanese women.” This “Japan First” defense of racist violence is troubling, and not unfamiliar. The Alleycats don’t actually need anyone’s protection, least of all the Eagles’, and they fight back against the men’s racism by helping Kazuma, a mixed-race Japanese, find his long-lost sister.

Stray Cat Rock: Sex Hunter contains subplots, subplots to subplots, musical numbers, gang fights, and everything you need for an entertaining 85 minutes. But at the center of everything is Mako, her long, center-parted hair and super-mod outfits creating an aura of tough-as-nails cool, as if she’s a woman who could never be broken. But in the film’s quieter moments, including a tender scene after the knife fight when Mako lies in the grass of the darkened field listening to Kazuma sing ballads, Kaji brings a gentleness to Mako that few other actresses could have pulled off. Despite its salacious title, and director Yasuharu Hasebe’s violent pink background, Stray Cat Rock: Sex Hunter is a fascinating tribute to its eternally cool leading woman.