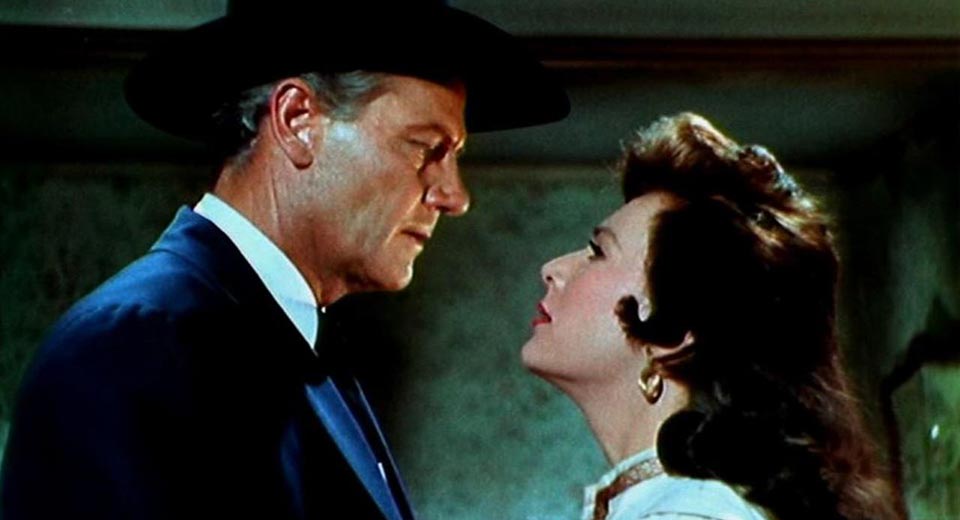 "In the Old West, justice and courtrooms were often strangers." For all the optimism imbued in familiar tales of the wild frontier, there exists in tandem a seedy undercurrent that exemplifies all the ugly little truths about human hubris and greed. Small-scale tyranny expands in the vacuum left by law enforcement, and too often it's the town sonsabitches that make the rules. Thankfully, a Stranger on Horseback has arrived to clear the fetid air in Jacques Tourneur's swift and painterly little horse opera, screening tonight as part of the highly anticipated Tourneur retrospective at the Film Society of Lincoln Center.

Territorial outpost Bannerman – so named for the real estate magnate at its center – is a town like any other: growing, albeit crookedly, away from the disinfecting sunlight of justice toward a dark little nook of corruption. But help is on the way in the form of tall and truehearted Joel McCrea, riding high in the saddle as the taciturn Judge Thorne. The Judge's arrival on serious business – investigating the murder of a poor drifter by scion Tom Bannerman, played with shit-eating insouciance by Kevin McCarthy – marks a civilizing new chapter in this backwater's history, and the beginning of the end for the powerful Bannerman clan.

A casual fan of Westerns and procedurals could easily time the beats of this familiar fable, but there is genuine satisfaction to be found in McCrea's performance of manly honor, in McCarthy's simultaneously kissable-and-punchable face, and in the expert manner with which Tourneur untangles the needlessly convoluted plot. Far from an iconic entry into the director's filmography, Stranger more closely resembles his fine work in a smaller, more intimate visual medium (c.f.: exceptional episodes of The Twilight Zone, Studio 57, and the like). Don't mistake this observation for detraction – if anything, it is a testament to Tourneur's gifts: for eliciting fine turns from his actors, and drawing to the surface those subconscious frequencies of emotion that separate lesser genre fare from the genuine article.