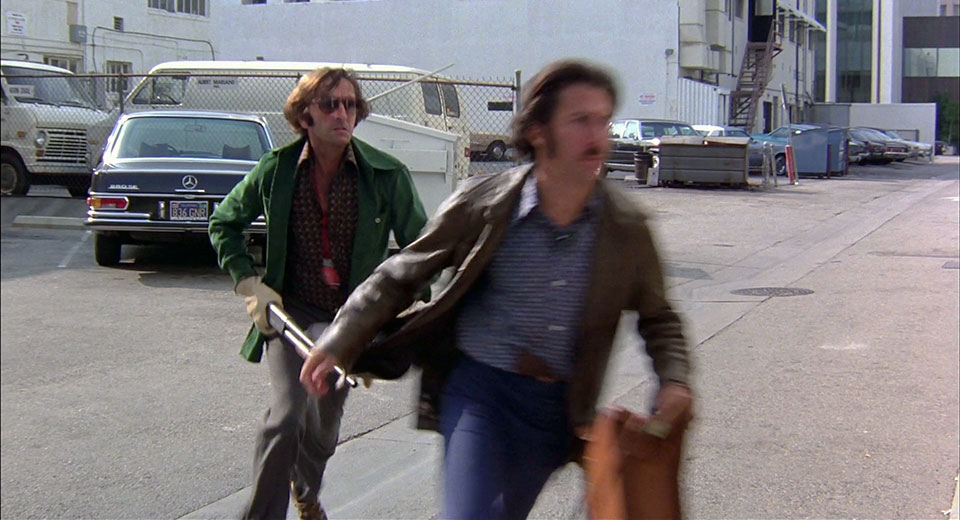 Since Harry Dean Stanton’s passing, many tributes have cited the “Stanton-Walsh Rule” from Roger Ebert’s Video Companion, which declares that “no movie featuring either Harry Dean Stanton or M. Emmet Walsh in a supporting role can be altogether bad.” It’s remarkable that their careers as two of the most consistently distinguished character actors from the mid-20th century to present day only crossed paths once: in 1978’s Straight Time, which drops them amid an already stellar cast including Dustin Hoffman, Gary Busey, Kathy Bates, and Theresa Russell.

In 1972 Hoffman purchased the rights to the source novel No Beast So Fierce by Edward Bunker, a career criminal, native Angeleno, and first-time novelist whose small role in the eventual film he successfully parlayed into a career on the other side of the clink playing tough guy bit parts. (Bunker, who passed away in 2005 at age 71, is probably best remembered for his role as Mr. Blue in Reservoir Dogs.) The star of Marathon Man developed Straight Time to be his directorial debut before bowing out from behind the camera a few days into shooting, graciously turning the reigns over to Ulu Grossbard, who previously guided the actor on Who Is Harry Kellerman…?.

Hoffman plays Max Dembo, a man who’s spent his life bouncing in and out of the pen on robbery charges. When we meet Max he’s determined to pursue the straight-and-narrow, spurred on in part by an improbably fast relationship with his employment office caseworker (Russell). But after cracking under pressure from his smartass parole officer (Walsh), whom he leaves handcuffed and pantless on the side of the highway, Max lands on a new streak of criminal schemes, linking up with Stanton for a series of robberies.

The Stanton-Walsh Rule is useful to invoke here, because much of what makes Straight Time enjoyable can be gleaned from the fringes. The script is surprisingly flat, with little elevating the stakes beyond the obvious, and Hoffman’s own performance is relatively muted. In light of the brief scene in which he plays one-on-one opposite Bunker—the man for whom Hoffman’s role might as well be a surrogate—it’s clear the star lacks a certain glint of sociopathy needed to make his character pop. The same couldn’t be said of Walsh, who delights in trolling his parolee; Busey, who might as well be a time-traveller dispatched from a decade hence to weird up such a quintessentially, almost boilerplate 70s movie; and Stanton, who conjures the most lowkey disturbing moment of the film with a fervent expression of pseudo-masturbatory self-absorption when Hoffman asks, “Did it feel good doing that bank holding that shotgun?” Oh yeah. Even if it only manages to be a sum of its supporting parts, Straight Time deserves a chunk of your day.