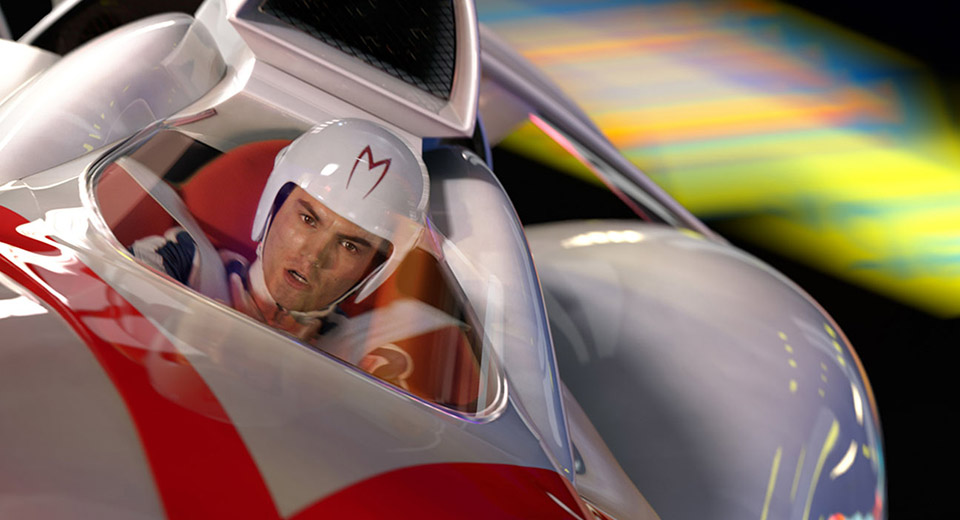 To date, green screens soundstages have been used primarily to deposit bewildered actors ahead of gelatinous armies marching toward plasticine blue-grey vistas. The results are as hideous as they are lifeless, lulling our eyes into a complacent awe fixated above all on immensity. It's ironic that the antidote to the dull visions of Middle Earth, Star Wars' volcano planets and Superman's Metropolis arrived courtesy of Lana and Lilly Wachowski, who can credibly be charged with setting the dispiriting palette for CG extravaganzas with their Matrix trilogy. Yet when they finally left Neo and co.'s desaturated dystopia, they swerved way left with Speed Racer (2008), a radiant confection in both form and content whose style will certainly age better than any DisStarMar offering from the early 21st century.

Hobbled by a five-year-old's sense of humor, Speed Racer is nonetheless a tremendous relief for anesthetized optic nerves as the Wachowskis hurl us through high speed Mario Kart crashes with as much joy as the sugar high shared by the annoying prepubescent comic relief and his pet monkey. Rifling through the digital toolkit, they soak the film in bold, primary colors and mostly abandon traditional cuts for layered wipes as characters whirl across the screen and leave new scenes in their wake. This collage approach (seemingly color graded in MS Paint) embraces the neglected grammatical capabilities of digital editing software and leave us waiting for someone else to take the baton.

The original Star Wars set the stage for dour VFX bloat in service of laughably simplistic Manichaean clashes and since then we've been treated to blockbusters chockablock with obfuscating grit masking idiotic moralism underneath several layers of "attitude" and handsome rubble. The Wachowskis heroically lean into the dichotomy by pitting the pure-hearted Racer family against the evil industrialist E.P. Arnold Royalton (played by Christopher Hitchens lookalike Roger Allam) who stops just short of twirling his mustache as he seethes "all that matters is power and the unassailable right of money!" Royalton wants to recruit Speed as a pawn for his cabal of race-fixing rich turds, but the latter's allegiance to the proudly independent racing team built by his family is unwavering. It's a rare big-budget CGI fantasy that features a white-collar crime investigator among its heroes, but the Wachowskis pass over the abstract evil of The Empire and Sauron in favor of their true real-world equivalent: multinational corporations. While basking in its digital artifice, Speed Racer circumvents the inanities of its genre's climb toward respectability.