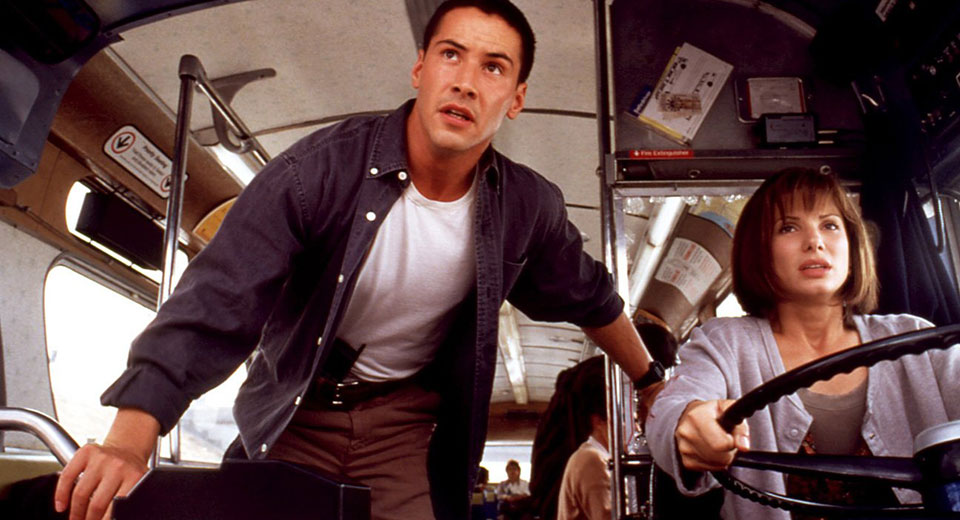 "I've heard relationships based on intense experiences never work." Unfortunately Keanu Reeves's character's closing quip from Speed (1994) turned out to be prophetic, and Sandra Bullock was the only half of the pair that made it into 1997's Speed 2: Cruise Control. In 2015 Keanu told Jimmy Kimmel about his original reaction to the sequel's script: "It was about a cruise ship and I was thinking, 'A bus, a cruise ship… Speed, bus, but then a cruise ship is even slower than a bus and I was like, I love you guys but I just can’t do it.'" Was Keanu disappointed with the original Speed's relationship with speed? What did he expect? And what is the nature of this relationship?

Jan De Bont had a nearly three-decades-long filmography as a cinematographer in the Netherlands and in Hollywood behind him when, 25 years ago, he set out on his first directorial venture. In outline: sociopath bomb-rigger Dennis Hopper's plan to detonate an elevatorful of office workers is thwarted by SWAT-teamers Keanu Reeves and Jeff Daniels, who are awarded medals of valor; not long after, Hopper plants a sophisticated bomb on a Santa Monica Big Blue Bus that will arm when the bus reaches 50 mph and detonate if it subsequently falls below that speed. Keanu boards the bus and, with the help of spunky commuter Sandra Bullock, eventually delivers the imperiled passengers to safety (spoiler alert).

The central theme of Speed is not speed as a quality (i.e. "the act or state of moving swiftly," per Merriam-Webster), but speed as a measurable quantity ("the magnitude of a velocity irrespective of direction"). 50 mph is not slow, especially for a Santa Monica commuter bus (whose average speeds in 1994 were closer to 12 mph), but it's not particularly fast either. The problem isn't "Go faster!", it's "Go just fast enough but not too fast." It's less about balls than about the measuring instrument; in fact, one wonders why Keanu doesn't just hack the speedometer to stay above 50 to trick the bomb's sensors just long enough to evacuate. While Speed might be a great teaching aid for high school physics, it can also be used to illustrate concepts of 20th-century Western philosophy. When Sandra Bullock rams the bus into a stroller filled with a homeless can-collector's harvest, Keanu tries to calm her down by saying the word "cans" over and over again, like Wittgenstein's builders with their slabs. In the final stand-off, Dennis Hopper goes all Heideggerian and gratuitously explains his thesis of the bomb's bombness: "A bomb is made to explode. That's its meaning, its purpose. Your life is empty because you spend it trying to stop the bomb from becoming."

When Speed was released, the Los Angeles County Metropolitan Transportation Authority had just been sued by the Bus Riders Union for racist budgeting; funds were disproportionately allocated to the Metrolink commuter rail system while bus lines languished underfunded (at the time, only 20% of bus riders where white, as opposed to 50% of rail commuters). Speed craftily sidestepped this issue by making the three most narratively important passengers' whiteness a matter of utter chance: a middle-aged lady who prefers taking the bus to driving because it relieves her muscle tension; a tourist looking for an off-the-beaten-path LA experience; and Bullock, who hates the bus and rides it only because her car is in the shop. Fortunately Speed is class-conscious in other ways; when Keanu astutely observes, "You're fucking crazy!" Hopper replies, "No—poor people are crazy, I'm eccentric." For all its cynicism, this comment on mental illness and poverty is just as on the money today as it was in '94. May God help us all.