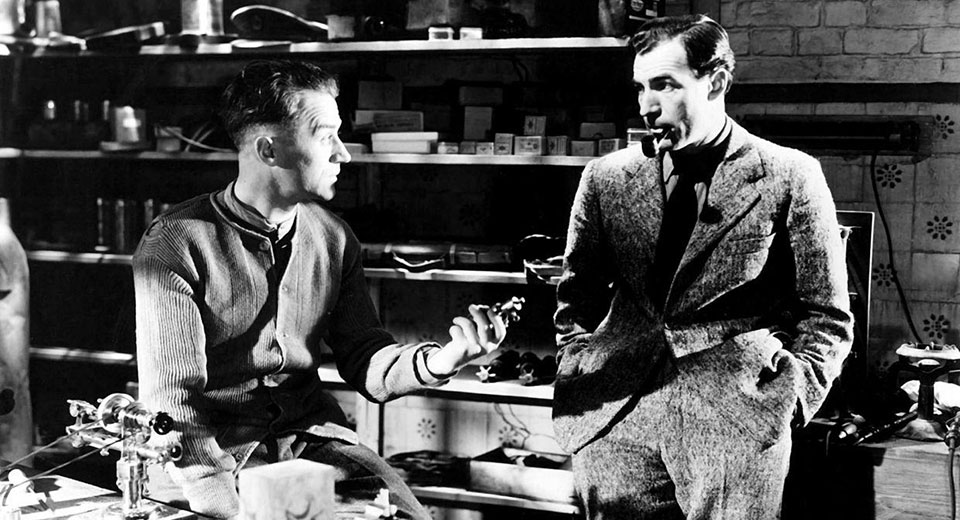 A distinguished professor once told a class of mine that he had enjoyed the Denzel Washington-Chris Pine vehicle Unstoppable, which had just been released. (For context, he had screened Peter Kubelka’s Arnulf Rainer a few weeks prior.) He waved off the incredulity of his pretentious film studies majors by calmly stating “I like trains, and I like movies, and I think they go together.” He didn’t elaborate, but it didn’t take more than a few seconds for some of us to realize he’s right. From the Lumière brothers to Snowpiercer, the cinema has fixated on trains, perhaps acknowledging their kinship as 19th century technologies circumscribing time and space. Watching Michael Powell and Emeric Pressburger’s The Small Back Room (1949) recently, it dawned on me that movies and bombs have similar, if less grand, ties. If trains resemble the momentum of celluloid barrelling through the gate, then bombs crudely recall the percussive impact of hard cuts. Trains connect geographical points, bombs disassemble single locations. Movies revel in both tendencies, though it must be said the bomb is more often exploited for lazy thrills. For better or worse though, bombs and movies go together.

The bombs of The Small Black Room are booby-trapped mines dropped during the blitzkrieg. Unsuspecting civilians have been picking up the objects, which resemble coffee thermoses, thereby triggering delayed explosions. Captain Stuart (the screen’s finest Alfred Pennyworth, Michael Gough) enlists scientist Sammy Rice (David Farrar) and his crew in the “back room” to figure out how to defuse the bombs before there are more casualties. But in treating chronic pain caused by his artificial foot, Rice has fallen into alcoholism, not only threatening his assignment, but a romance with Sue (Kathleen Byron), his compassionate secretary.

Rice’s fight with the bottle and his responsibility to handle unexploded bombs provide Powell and Pressburger with exquisite opportunities to fashion surreal dark-fantasy sequences and a brilliant white-knuckle setpiece. The latter involves a defusing operation on Chesil Beach, where each displaced pebble threatens to disturb the bomb and blow Rice to bits before he’s confronted with an approximation of the eventually classic choice between cutting two wires. Before bomb disarming sequences became action movie mainstays, Powell and Pressburger offered an excruciatingly tense prototype tucked within a compelling drama concerning addiction, impotence and duty.