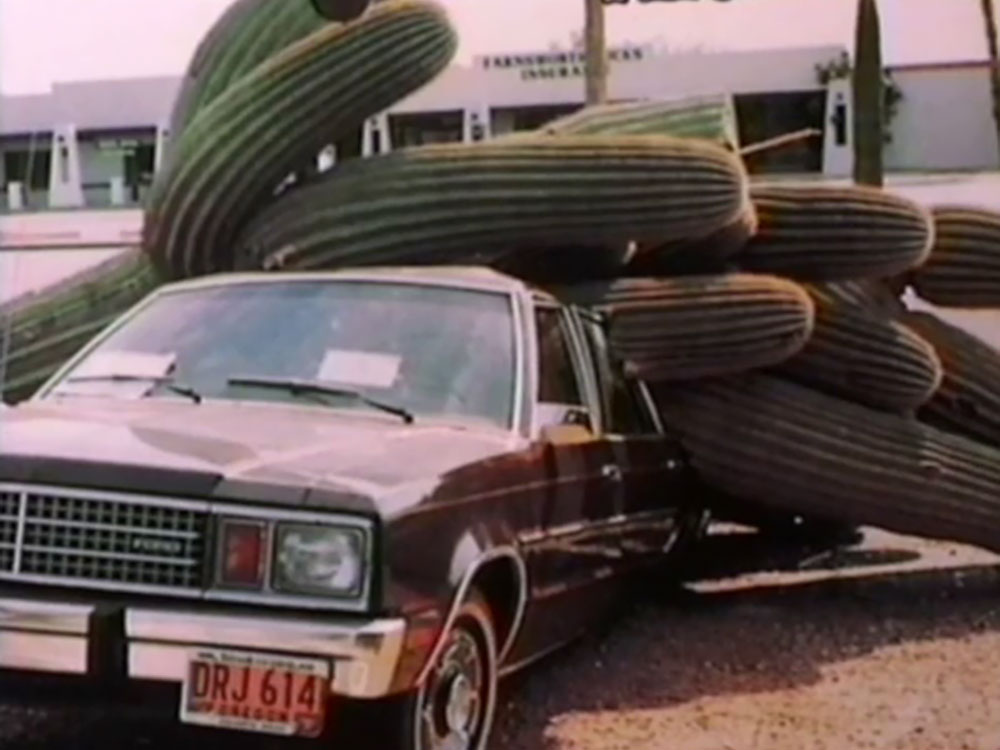 “I am going to tell you a thing or two about this place that I am from? Winslow, Arizona?” opens the narration in Sativa Peterson’s 1997 film, The Slow Escape. Each upswinging question mark is felt with intention: Peterson’s voiceover is delivered in a wavering whisper, naif and intimate, as if recounting a nightmare immediately after waking up. Her voice, and the opening images of a girl in a bathing suit and cowboy boots jumping carelessly on a trampoline, are in stark contrast to the bleak mood that has already been set—film grain so heavy it has settled into murk, the repeated gunshots of highway cowboys using cacti as target practice, and text invoking the Greek concept of miasma: that anyone with the slightest tangential connection to a murder has been saddled with a personal resposibility of retribution.

The narrator continues by quietly singing the first few bars of The Eagles’ “Take It Easy,'' confirming that yes, that is how you are familiar with the city. (Twenty years later the filmmaker wrote a piece for the Phoenix New Times describing how the song has come to dominate Winslow’s culture.) Despite Lana del Rey’s recent proclamations that “they play the Eagles down in Malibu,” any invocation of the crusty yacht rockers will never fail to inspire in me anything less than dread and contempt, furthering the portrait of a city in a dire spot. It’s 1988 and the narrator is a junior in high school and a late-night DJ at the local radio station—”KINO radio, 12:30 am, your friend in the country”. The railroad industry that has been the town’s backbone is dwindling, and a prison just moved in: “Oh… and parts of the movie Natural Born Killers? Were filmed here too. Don’t let any of this fool you; it’s a nice, quiet place to raise a family.”

The Slow Escape recounts the narrator’s burgeoning interest in the disappearance, and probable murder, of a local young woman, whom she did not know, but who continues to haunt her imagination—in part due to her fear of the “male stranger” as she closes up the station in the middle of the night—long after public interest has ceased and the investigation has stalled. Over and over, older men confess to her that they believe they know who the killer is, but make her swear to keep it a secret, while they themselves do nothing to act on these inklings. This culminates in a manic night-long visit by an uncle (“we spun and spun until morning”), who makes an unnerving confession when he believes the same man is trying to kill him.

“It’s hard to know what to say in tribute to a person you’ve never known, but that is what I am trying to do here,” Peterson explains late in the film. This vulnerable empathizing with the victim, an admission of the stain that a location—especially the city where you came of age—and it’s unclosed wounds can leave on you permanently, is endearing. It’s a break in the armor of steely self-preservation to remember someone that a city might prefer to forget, without the spectacle of a true-crime doc’s fear-mongering. “Our relationship to the woman stranger we meet on the road is forestalled,” Vanessa Veselka writes on the social invisibility of the itinerant woman. “We turn away. We don’t want to see. We sanction this invisibility, because her visibility forces a choice: whether or not to save her. Left with the pressure to rescue or run, it’s just easier not to see.”

The images in the film feel dusty, tactile, unearthed; a splicing together of interlaced home video footage and foreboding archive—the red blinking of the radio station’s transmitter, pulsating decibel meters, glowing dashboard lights on deserted highways, repeated shots from The Texas Chain Saw Massacre—briefly glimpsed. (Peterson describes this collating of Hi-8 and Super 8mm material less as filmmaking and more “image collecting,” evoking a physical scrapbook.) The resulting collage, when taken as a whole, is something akin to the cracked desert Americana of Nina Menkes’s Queen of Diamonds.

Despite being autobiography, The Slow Escape does not feel like memoir—it’s too well-spun and aware of its horror-film swatches, and the nameless narrator (and her haunted, performative reading) is cloaked in a specter of anonymity despite our assumptions that it is the filmmaker. I originally saw the film on a VHS of one of Miranda July’s Joanie 4 Jackie chainletter tapes, which now reside at the Getty Research Institute and are currently featured on the Criterion Channel. As the Joanie 4 Jackie website states, “the primary audience for each Chainletter tape was really just the ten women who had contributed to it—the goal was intimacy and connection.” This mode of distribution is fitting for the film: it is a personal secret told orally, a quiet admission of guilt, a reminder not to look away.

The Slow Escape is currently showing on The Criterion Channel as part of the Joanie 4 Jackie collection, and is also available on the filmmaker’s Vimeo. 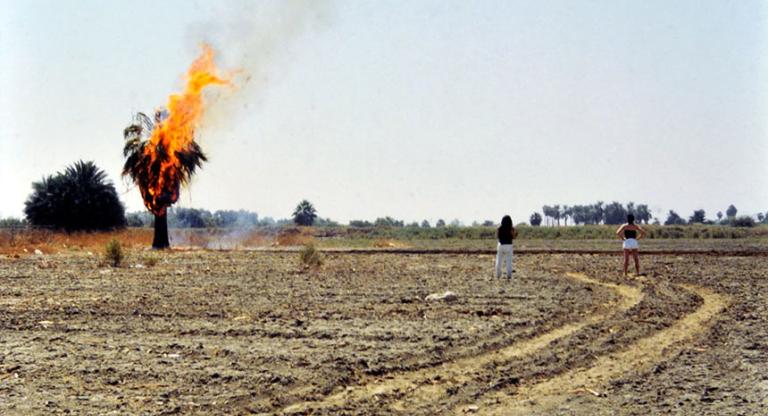 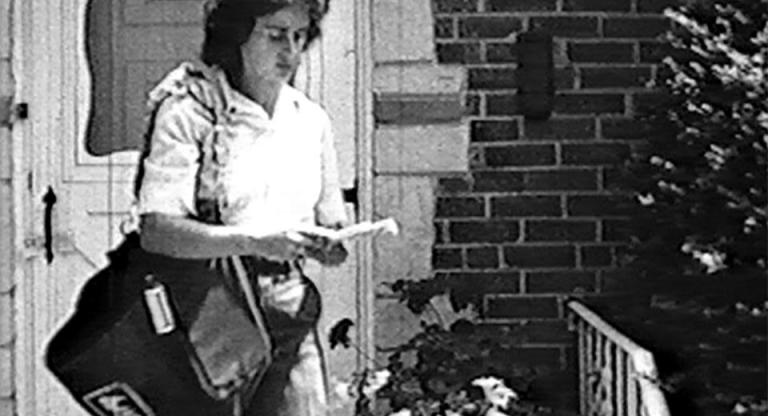 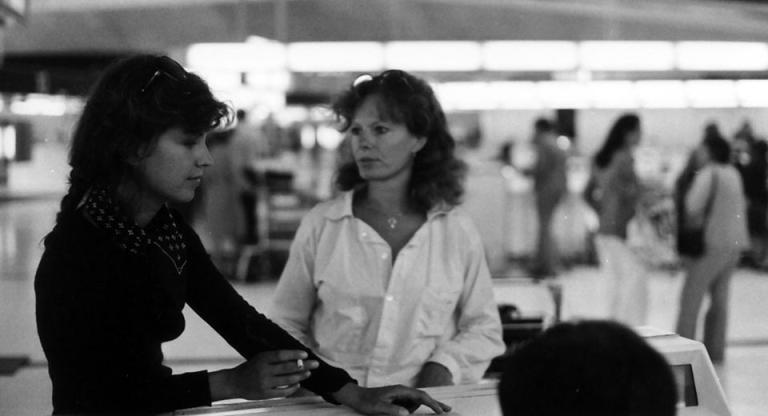