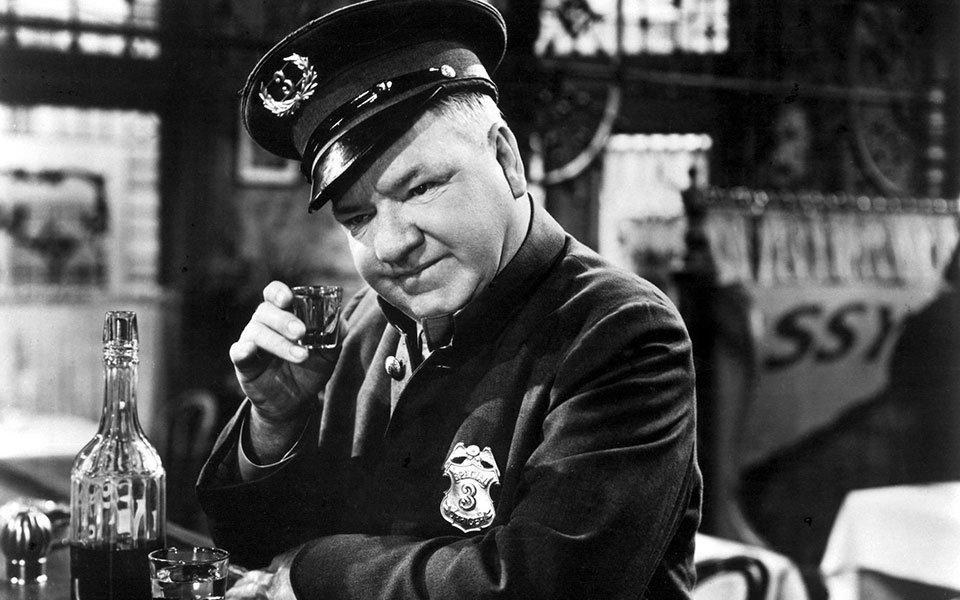 I remember the moment W.C. Fields clicked for me. When I was 14, several months after my grandfather’s funeral, I saw Fields’s short film “The Dentist” (1932). In its opening seconds, Fields, sitting at a breakfast table in a middle-class house, barks at his daughter, “Where are my glasses??” “They’re on your head,” she replies coldly. “Oh yeah…” he mutters in his distinctive rusty drawl. He barks again: “Where’s the newspaper??” “You’re sitting on it,” she says. “Oh…”

This moment struck me like a lightning bolt, because I’d had many nearly identical exchanges with my grandfather, and had enacted versions of them as my go-to anecdotes when reminiscing with long-lost relatives at the funeral home. My grandpa loved W.C. Fields, by the way, and I imagine he must have seen himself in Fields’s screen persona. Grandpa was an average man who worked an average factory job, raising five kids in the Toronto suburbs. He spent 50 years in a marriage that somewhere along the line became loveless, and contented himself with a life of simple pleasures: reading the paper, going on walks, hitting up the Legion, and maybe enjoying a pint when his wife wasn’t looking. When I knew him, he was always a little foggy – the early stages of Alzheimer’s, I suppose, but also partly because he always lived in his own world, appreciating private jokes at everyone’s expense. Sometimes he’d tell me well-worn stories of his army days (“We’d get our pay and then we’d roll the dice… and maybe get in a bit of fisticuffs… but that’s good for a young man”), or arrive home with his dog’s turd in his hand, asking if I wanted to examine it before he flushed it away. (I didn’t find it funny then, but I do now.) Randomly, I also remember that he resented Frank Sinatra. Sinatra was a Catholic who divorced. Grandpa always felt that if he could stick it out, so should Ol’ Blue Eyes. I’m sure he had a lot more admiration for Fields’ gallery of henpecked husbands.

Grandpa was a man of upstanding moral character, but he enjoyed how Fields could be cruel and spiteful towards children, animals, and other annoying and undeserving targets. Take “The Golf Specialist” (1930), Fields’s first sound film, and one of five of his shorts now streaming on the Criterion Channel. Early in this film, Fields is confronted by a screechy-voiced child (age: five) who shows him her piggy bank. She asks him if he will give her a dollar, and then keeps tugging at his pants even after he refuses. She then unwisely informs him that she already has $50. Guess what he does. That’s right – he tries to steal her piggy bank. Appalling behavior? In his defense, the child was greedy, irritating, had a screechy voice, and frankly had no business carrying around $50 that rightfully should have been his. If you can adjust yourself to this moral framework (and really, it shouldn’t be too hard), then Fields might be to your taste.

Fields began his career in vaudeville in the 1890s as a juggler, slowly becoming a comedian as his patter grew more popular than his juggling. He entered movies in his 30s with the silent “Pool Sharks” (1915), a knockabout slapstick comedy similar to early Chaplin. He didn’t become a movie star until his 50s, by which time his shtick was set – as comfortable and textured as an old shoe. His best films allow him ample space to simply recreate his best bits from vaudeville. “The Golf Specialist” spends most of its running time on his golf routine, in which he keeps trying to demonstrate a perfect swing (“Stand clear and keep your eye on the ball…”) while being distracted by squeaking shoes, a crinkling map, etcetera. Playing with duration and eschewing punchlines, routines like this have a kinship with the existential, patience-testing comedy of Samuel Beckett on the highbrow end and Jerry Lewis on the low.

But unlike, say, the Marx Brothers or Abbott & Costello, Fields was not merely a vaudevillian transplanted to a soundstage. In the films where he had creative control, Fields created a unique cinematic landscape of gargoyle-faced character actors and whiny children in dusty, dreary small towns bereft of the sentimentality with which movies typically imbue them. Writing under pseudonyms like “Mahatma Kane Jeeves” and “Otis Cribbelcross,” his personal films displayed contempt for the rules of a “well-made movie” and instead poked at the form. “The Fatal Glass of Beer” (1933), for example, is set in the frozen north, and has a scene where Fields shouts orders at his team of sled dogs – who are projected on a screen in front of him, completely out of scale with his own body. This particular short is a parody of temperance melodramas – a type of entertainment that was already antiquated in the ‘30s and which feels positively prehistoric now. Nevertheless, the film endures because the sight of Fields traipsing around a pathetically chintzy fake Yukon setting and speaking in old-timey stage diction is timelessly funny.

As with the Marx Brothers, Fields’s work enjoyed a revival in the ‘60s and ‘70s among college kids who took him as an anti-authoritarian hero. He has been less visible in recent years, but he would have been well known to the writers of shows like Saturday Night Live, SCTV, Late Night with David Letterman, and The Simpsons in their most important years. If his contemporary presence is indirect, it is still prevalent. You can see flickers of his inebriated ghost in “The Dude” from The Big Lebowski, or in Norm Macdonald’s windy, digressive stand-up monologues, while the abrasive, off-center comedy of Tim & Eric recalls the dizzying heights of surrealism reached by “The Bank Dick” (1940) and “Never Give a Sucker an Even Break” (1941). The short films on the Criterion Channel are breathtakingly pure little nuggets of coal, and a very welcome introduction to the Great Man.