The Shining Forwards and Backwards 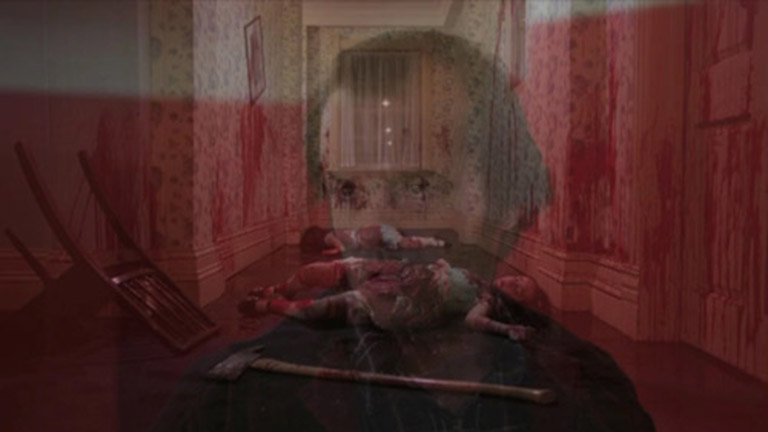 In recognition of today’s 40th anniversary of the release date of Stanley Kubrick’s The Shining — and the extreme collective brain warp we are all feeling after two months of quarantine — I am pleased to direct readers to The Shining Forwards and Backwards.

Dark Side of the Rainbow for the 21st century, The Shining Forwards and Backwards is a hallucinatory, palindromic mindfuck resulting from musician John Fell Ryan’s literal interpretation of a fellow obsessive’s statement that “The Shining is a film meant to be watched both forwards and backwards.” A kind of structural found-footage epic, it riffs on the Kubrick film’s employment of doubles, symmetrical compositions, bifurcated plot structuring, and enigmatic suggestions of non-linear time and eternal repetition by reversing the film from start to finish and superimposing it directly on top of itself, creating unexpectedly profound juxtapositions at nearly every moment. 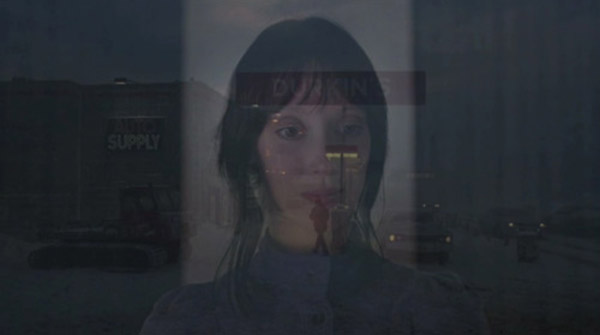 Working with Akiva Saunders of then-nascent Spectacle Theater, Ryan explains in a Tumblr post, “we put the US DVD version into Final Cut, removed all corporate logos and leaders at the beginning, and cut all credits at the end. The entire film image sequence was then copied, reversed and superimposed over the original forwards version.” As I recall Saunders explaining at the time, they also made shot-by-shot tweaks to the opacity. The video premiered at Spectacle on March 9, 2011, opening with a “lecture by monomyth instigator KM with a few examples of the hidden anomalies lurking within.” This screening was immortalized in Rodney Asher’s documentary Room 237, released the following year. A subsequent show in October that same year included further live video manipulation and scoring by Saunders, Ryan, Tony Lowe, and Jason McMahon.

The project continued to evolve. I was a programmer at Spectacle at the time and also inspired by the experimental (in the sense of often involving investigation and trial-and-error) remixes and live scores Akiva was spearheading, which resonated with my own pre-existing appropriation projects. With Akiva’s blessing, I recreated the project in HD, which showed maybe once — what it gained in resolution, it lost in Akiva and Ryan’s meaningful choices and the specificity of the DVD format (something that feels all the more apparent now). But in 2013, in consultation with Akiva, I generated The Shining Backwards and Forwards and Inwards and Outwards in High Definition Anaglyph 3D (Chaos Mix), which post converted the “forwards” and “backwards” tracts to 3D at gradually increasing/decreasing depths intersecting at the middle. (In other words, the forward track begins “flat” and expands to “super 3D” by the end, and vice versa.) (Here’s an excerpt.) 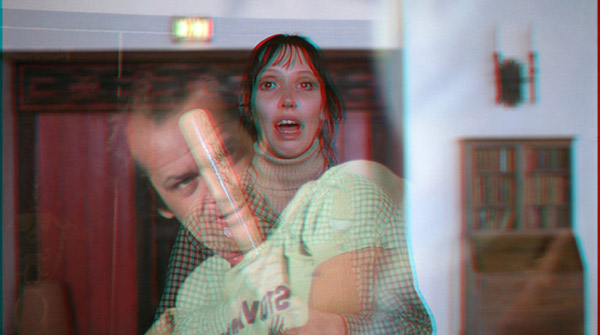 For the recent incarnation, The Shining (Backwards and Forwards), Saunders and Ryan performed during the Monkey Town 3 residency at Eyebeam on August 3, 2013. Using the original and the anaglyph conversion, the duo projected the video on four screens inside a cube with live video and audio manipulation. As William Corwin described in The Brooklyn Rail, “Equipped with 3D glasses, viewers sat or lay down inside the cube for the 142 minute run of the film. This produced the illusion that much of the action was taking place several feet in front of the surface of the screen. The ghostly forms of the film and the warm-human bodies of the viewers interacted in an unsettling and visceral combination. … The film became less of a plot-driven escapade than a ballet of spirits and specters, innocent babes, and demons. It was like a bas-relief circumscribing an altar, where story and image exist simultaneously.”

The original version created by Ryan and Saunders is available to view here. In my estimation, it’s one of the best works of the last decade.