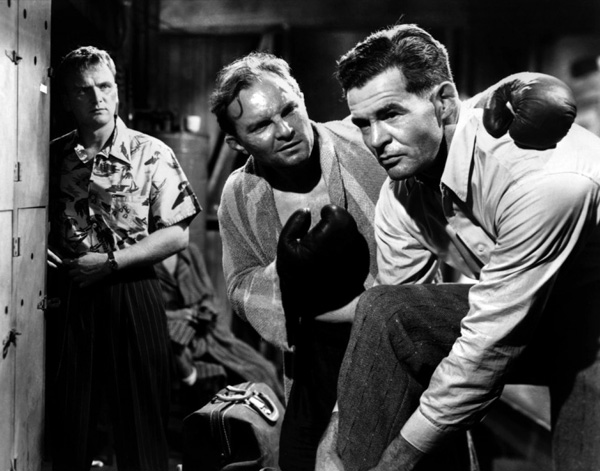 The Set-Up , directed by Robert Wise and produced on a shoestring and a small RKO backlot in 1949, is an epic and deeply personal B-picture about the heartbreaking disappointments of boxing. A fluid, graceful camera moves through the film’s very few settings: a cheap room at the “Hotel Cozy”, a town square in a place called “Paradise City,” and, of course, the ring. In the center of Paradise City stands a clock which marks time in the film’s real-time seventy-three minute span (one year after Rope).

Robert Ryan plays Stoker, a past-his-prime boxer, all heart, but an old man at age 35, and “always one punch away” from top billing and a longed-for retirement in his very own cigar stand somewhere. Audrey Totter plays his wife Julie, who can no longer bear to watch him get pummeled senseless in small town after small town. For the first time on this fateful evening, she refuses to watch the fight, and Stoker crosses the street alone on his way to the Paradise City ring (“Boxing on Tuesdays, Wrestling on Fridays!”).

Stoker waits his turn in a locker room full of other fighters, some on their way up and others on their last legs. He keeps looking out the window and across the way, to the lit windows of his and Julie’s room at the Hotel Cozy, to see if she’s changed her mind. She hasn’t.

Meanwhile Stoker’s manager is pocketing $50 to throw the fight, an insurance policy bought by the opponent’s manager to ensure that his rising young star will continue on an upward trajectory. Trouble is, Stoker’s manager doesn’t bother to tell him that he’s supposed to take a dive. He figures that Stoker won’t need telling, and he doesn’t want to cut him in on the $50.

The fight is four real-time rounds, and it builds to an absolute frenzy: “Stoker hit him with everything but the bucket. He was landing more than the marines.”

The Set-Up’s screenplay was adapted by Art Cohn from a poem by Joseph Moncure March. March was a protege of Robert Frost’s and wrote The Set-Up as a long narrative verse poem in 1928. (He later worked as a screenwriter in Hollywood and came up with: “Excuse me while I put on something more comfortable” for Howard Hughes’ talkie remake of Hell’s Angels.) Wise’s film retains a sweetly unfolding melody in pace and movement that belies its sordid atmosphere, and as the editor of Citizen Kane and The Magnificent Ambersons, Wise knew a thing or two about pace and movement. Also, in the tradition of epic poetry (and much of film noir), The Set-Up presents a heroic and metaphysical confrontation between starkly drawn good guys and bad guys. The audience and fun-seekers of Paradise City, a town full of saloons and dance halls, are an important part of this allegory and are definitely bad guys. Boxing is a sport played out for crowds of bloodthirsty imbeciles in the service of a formalized, rigged gambling system in which very few men make the big money, and it chews men up and spits them out even when they win. Maybe especially then. Better to retire to that mythic cigar stand.

March’s poem was actually about the obstacles and violence faced by a black fighter named Pansy Jones:

Pansy had the stuff, but his skin was brown
And he never got a chance at the middleweight crown

RKO claimed to have no black actors who could star in the film at the time, citing studio contract rules, which drew condemnation from March—if no one else. Ten years later, Robert Wise would direct what is arguably the first noir with a black protagonist: Odds Against Tomorrow with Harry Belafonte, also featuring Robert Ryan. Stoker, though white, does share some big problems with Pansy: backstabbing managers who sell them out and a record of losses stretching out, for too long, behind them.

A fighters life is short at best.
No time to waste, No time to rest.
The spotlight shifts, The clock ticks fast:
All youth becomes old age at last.
All fighters weaken.
All fighters crack. All fighters go –
And they never come back.

Well, So it goes: Time hits the hardest blows.