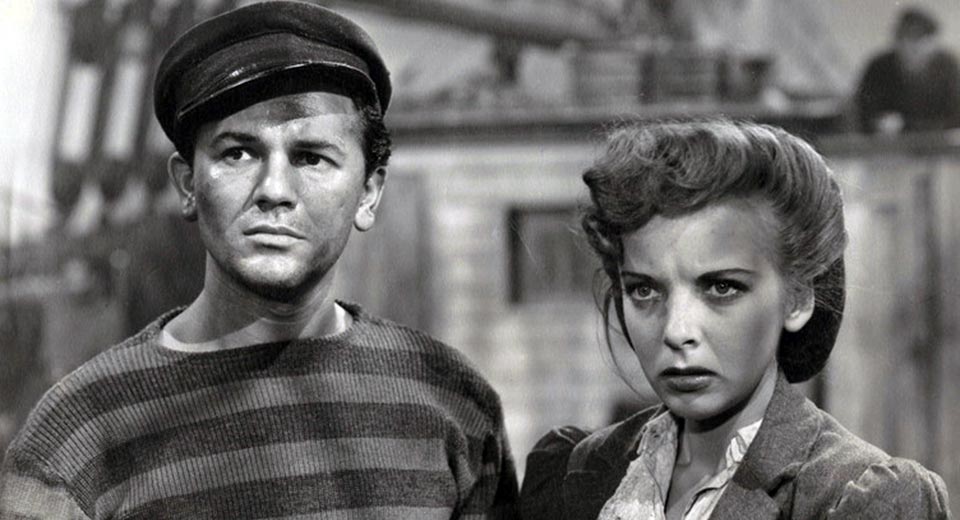 When it was released in 1941, The Sea Wolf —directed by Michael Curtiz from a script by Robert Rossen—was largely ignored as a cheerless action picture. It’s 1947 re-release validated that impression, sticking it on a double-bill with an Errol Flynn swashbuckler providentially called The Sea Hawk. However, history has been kind to The Sea Wolf, seeing it praised as a sharper and more coherent critique of class relations than it was initially given credit for. Tonight, a “complete uncut pre-release version” plays at Film Forum , offering another occasion for its reappraisal.

Adapted from Jack London’s 1904 novel, the film follows a traveling writer (Alexander Knox) and two young convicts (John Garfield & Ida Lupino), who are separately on the run. All three unwittingly find themselves in the hands of Wolf Larsen (Edgar G. Robinson), captain of a damned seal hunting ship named The Ghost. And while the writer prods the captain’s ego, John and Ida look for a way off the boat. Men are thrown overboard. There’s a mutiny plot. But, more interesting than the action is the character of Larsen, a working class tyrant and self-taught intellectual, who overidentifies with Satan’s declaration in Paradise Lost: “Better to reign in Hell than serve in Heaven.”

Heaven in that equation is ambiguously described by Lupino’s character as the freedom to be left alone. But Hell in the film is clearly defined as poverty. Some of Rossen’s dialogue was cut for being too “political,” and one can imagine that he originally saw London’s story as a kind of allegorical equivalent of George Orwell’s Down and Out in Paris and London—complete with degrading scullion work for the writer, and examples of the mental damages exacted by capitalism.

Regardless of what was cut or not cut, the film’s most interesting political implications are in its images—shot by Sol Politio—and not in its dialogue. Everything is sat tensely in the middle-ground. We see the actors from the torso up, or we see just their faces. And this awkward constriction of space gives every scene a claustrophobic perspective that equalizes everyone, whether shot from above, below, or straight-on. Larsen looks small and human, even when he is beating a man or reciting Milton. While Garfield’s speech that ends: "Men like Larsen keep grinding us down because we're nobodies. But that ain't true. We're somebodies!" is saved from hokeyness by the fact that a close-up of a damaged kid says it, rather than the heroic framing of a martyr.

In that sense, The Sea Wolf isn’t quite a socialist anthem. It’s still a code-conscious forties production, with plenty of sentimentalizing and a tear-jerker ending. But, within those constraints, it poses complex questions about class and solidarity—that it unambiguously answers with the level playing field of its visual style.