The Savage is Loose 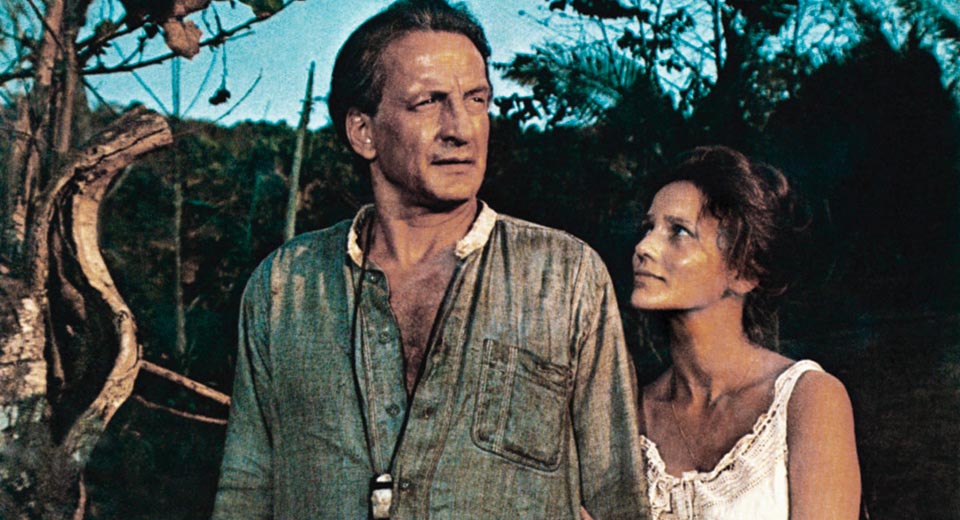 The Savage is Loose is a 1974 melodrama directed, produced, distributed by and starring American treasure George C. Scott. It is nearly impossible to find beyond very low-fi bootlegged DVDs, and these facts alone make it a curio worth experiencing on the big screen.

John is an academic who in 1905 is shipwrecked on an uninhabited island, surviving with his wife Maida and their infant son David through that particular ingenuity that all shipwrecked dads seem to have - building complex structures from downed trees, hunting wild boar with patience and ease, keeping their teeth very clean and white, shaving with a dull, salvaged knife. Maida, being a woman, is hysterically committed to the trappings of civilization, whether in the form of her still-intact-after-seven-years petticoats or her music boxes; though she is upset by it and maintains minor counter efforts at first, Maida acquiesces to John's insistence that David be raised not with written language and the Christian religion but rather to survive in the wilderness above all else. This seems to work out fairly well until David hits puberty, at which point he is overcome with hormones, expressed in filthy, longing looks at his aging-but-increasingly-busty mother and schemes to murder his father.

The unrushed pace of nature shots and unspoken discomfort of The Savage is Loose encourage the mind to wander - particularly to comparisons with other films. Take Scott's starring role as a father helpless in the face of his child's sexuality, a situation he was to repeat in 1979's Hardcore. In the latter film we watch as a confidently devout and principled man discovers the world of amateur pornography and the fruits of midwestern repression thoroughly blossomed and violently deflowered. By contrast, in Savage, Scott's physiognomy is as captivating as always, but inscrutable, or vacant, devoid of context or personal meaning - the characters are without identity beyond "civilized" and "savage," "male" and "female," "mother" and "child," playing out complexes and arguments about the nature of language and education, lacking the specificity to carry the weight of all the impassioned stares.

Or perhaps more directly comparable is 1980's just as reviled by the critics but contrastingly successful at the box office survival drama, The Blue Lagoon. As in Savage, Lagoon follows the confused and painfully limited sexual awakening that accompanies puberty borne of a childhood spent marooned on an island with a sexy relative. Why is Lagoon so much more of a cult favorite than The Savage is Loose? It likely has something to do with its more artful use of the tease: Maida's hair isn't really long enough to strategically glue, and David is intentionally played more frighteningly and disturbed than his blonde counterpart in Lagoon - though his hair is just as pretty.

But there are memorable, surprising sequences in The Savage is Loose: the accidental discovery of an anatomically correct doll hidden in a damp subconscious layer of the jungle, or the total destruction of the family's living quarters, free of CGI but raging with the shockingly real fire and blatant disregard that accompany all films about egomaniacal men confronted by the absolutes of the jungle. It plays just once, and likely won't again for some time, at the Quad - don't miss it.