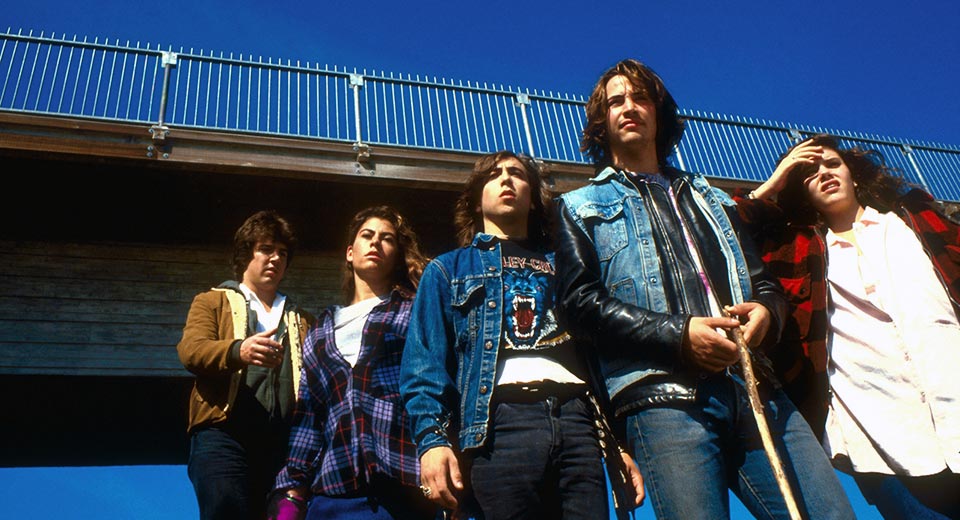 Early in 1986’s River’s Edge , the film’s core group of friends slump on the school steps, cutting class, smoking, and fantasizing about their ideal lives. “We could just… take off, discover America, and make like we’re Easy Rider plus five.” Likely he picked up the vague notion of freedom the film represented to his parents’ generation without ever having seen it, but the movie’s grim ending—arbitrary, random death—applies far more directly to their lives.

Apathy weighs so heavily among them they do little but self-medicate with beer and weed. Hearing their friend John’s casual confession of murder, they dismiss it. Confronted with their friend Jamie’s body by the river, they react with numb inaction. Layne (Crispin Glover, fresh off Back To The Future and stretching words like taffy), is invigorated by the opportunity to actually do something and prove his worth, even if that means covering up a murder not even the murderer cares enough to hide. Only Clarissa and Matt (Ione Skye and Keanu Reeves, each 3 years away from their breakout roles) feel uneasy enough to separately consider telling the police. Clarissa’s learned helplessness is so ingrained that, picking up a phone, she has her friend dial for her before ultimately hanging up.

Matt actually gets through to the police, and is rewarded by being dragged to the station. Answering a barrage of questions, the detective shouts at him “I’M SICK OF ‘I DON’T KNOW’!” The older generation repeatedly mistakes lack of articulation for lack of emotion, particularly a Boomer teacher using Jamie’s death to berate students for their passionlessness. “There was a MEANING in the madness!” he boasts of his hippie protesting, to a roomful of students facing a failing economy and the looming threat of instant nuclear obliteration beyond their control. The students do have feelings, but how they feel won’t change anything around them.

Hope and excitement are so lacking in their lives they latch on to TV and movies as metaphors—after seeing the body Layne says, “…I feel like, Chuck Norris, y’know?” Facing her own dispassion Carrie confesses, “I cried at Brian’s Song, but I didn’t cry for her.” The ghost of Easy Rider even lives among them: Dennis Hopper plays Feck, former biker turned recluse, handing out dope to local teens and enjoying a meaningful relationship with blow-up doll Elly. Like John he too killed his girlfriend, the difference being Feck killed out of love, while John did it to feel a brief surge of power and control—to feel anything, really.

Feck is horrified by John’s utter nihilism, but at least he can feel horrified. Jamie’s nude, inert corpse shown throughout the film, as much a part of the town’s casual cruelty as Matt’s younger brother shooting crayfish in a bucket, is sanitized for public display at her open casket funeral—her friends pass by it blankly staring. By the film’s end, only Feck says, “I lost a good friend today.” Though they have trouble articulating it, Clarissa and Matt come to recognize a buried morality in each other. —Danielle Burgos