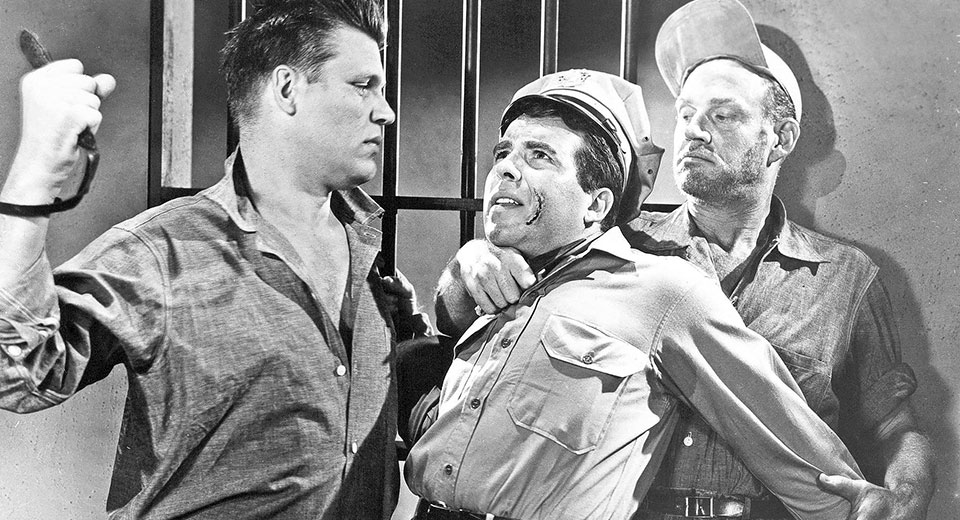 If you’ll pardon my substituting the customary lede for a bit of personal anecdotage: last week I popped into the Whiskey Tavern, on Baxter Street, for a very late nightcap. Nothing special, but this kind of establishment has become increasingly rare in our increasingly rarified city center. The decor is unassuming, they serve High Life, there’s a pool table, all very standard issue. What sets this downtown dive apart from similar watering holes, however, is its location.

Nestled between Marvin’s Bail Bonds and a tailor shop, Whiskey Tavern occupies a row of storefronts directly across from the Manhattan Correctional Facility, colloquially known as the Tombs. Mid-conversation with my drinking buddy, I happened to look up from lip of my bottle just in time to spot a half-dozen orange-clad inmates as they shuffled through a glass-brick-walled skybridge separating the Civic Center from its adjoining detention facility. Had I stepped away to the powder room, or simply chosen a different bar, the opening grafs of this eventual review would have a wholly different tone.

The day-to-day maintenance of “law and order” upholds a skewed state-within-a-state, one predicated on stashing many of our most vulnerable citizens in vast urban fortresses or sprawling rural complexes far from the prying eyes of actual justice. It is the obfuscation of these banal and multifarious human rights violations, both at home and abroad, that serve as the guiding principle behind Anthology Film Archives’s “Prison Images” series, a diverse slate of titles ranging from exploitation films to incendiary political documentaries.

Included in this array is tonight’s offering, Riot in Cell Block 11, Don Siegel’s reform-minded docudrama shot on location at California’s notorious Folsom Prison. Utilizing newsreel footage culled from facilities around the country, Riot swiftly brings the viewer up to speed on the heretofore unconsidered conditions that passed for rehabilitation in 1954. There is nothing “correct” about the modern carceral state, if the true end goal is reform and remedy. Rather, the institution shown here – like its counterparts in New Jersey, Michigan, and Pennsylvania (all “Yankee” prisons, notably) – succeeds only in disappearing its inhabitants into a black box of the barest possible accommodations.

Siegel, flexing his signature gift for economy, draws no lively beauty from these hard stone edifices. If anything, he lures the eye again and again to the spiritual emptiness of a foul place cleaved by shadow and tangibly clammy. Exposition is expertly utilized, instantly inuring viewers to the prisoners’ plight. These men are “nobodies” – not megawatt somebodies in the pampered forms of Ronald Reagan or Erroll Flynn – and many of them cast from Folsom’s existing prison populace.

In smokey press conferences, the sympathetic Warden returns again and again to a tired list of excuses: that his skeleton staff are underpaid, that the state refuses to fund much-needed repairs to the overcrowded cell blocks and, by extension, the Department of Corrections cannot do their jobs. In one unusually tender scene, a hostage prison guard and his inmate “trusty” chat man-to-man about their respective family lives, and in so doing sniff out a shared humanity. We quickly discover that the hostage guard works two jobs – he too is failed by the state, albeit through more legitimate method of market capitalism.

This brokenness is everywhere but on the tongues of enforcers and members of the free press. With Riot, Siegel artfully shows the ugly truth that our leaders dare not embrace: that this prison – and, by extension, all prisons – do not work. Then, as now, our elected officials insist on treating crime as a communicable disease, manifested by the foolish belief that quarantining – rather than treating – the “infected” is still, somehow, the most effective method for combating violence, theft, and “errant” behavior. Airlessness and sameness are the means through which the state can claim to reeducate a criminal, whose own crooked path to the pokey was no doubt carved from the uneven topography of American life. The inmates of Cell Block 11 could be any man that walks among us, like those ghostly shapes shuffling just outside the Whiskey Tavern. And if any nameless man on the street can be buried alive in the whale’s belly of so-called justice, it is not so far a leap to assume that one of us could be next.