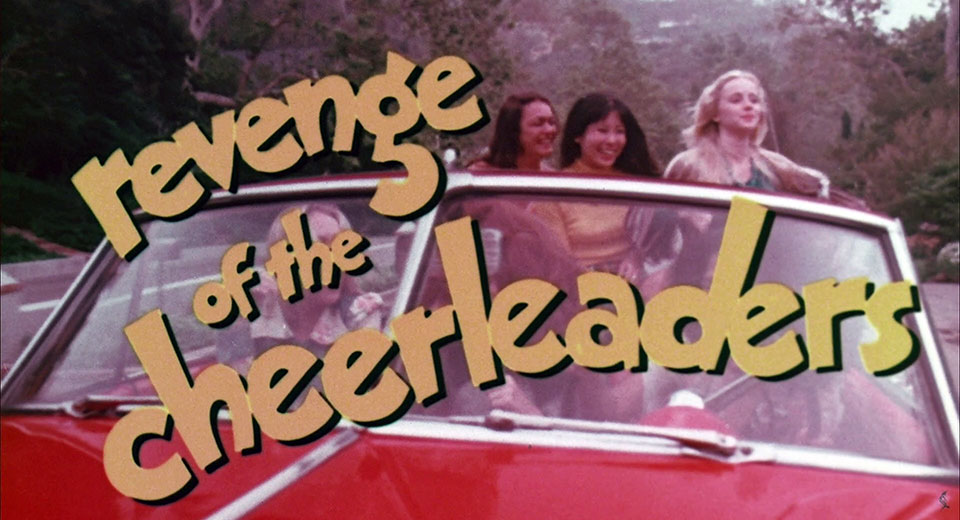 The third installment in a series of Cheerleaders movies (after The Cheerleaders and The Swinging Cheerleaders), Revenge of the Cheerleaders is seemingly the most low budget and certainly the most fun – a high school sex comedy more anarchic than Rock 'n' Roll High School, more sexually liberated than Porky’s or American Pie. This time out, the setting is a particularly debauched high school in the improbably named town of Aloha, California. Quite unlike any other high school, even in the movies, the temporary autonomous zone known as Aloha High is ruled benignly by the Cheerleaders, who, in between cheerleading, carry out a raid on their rivals at Lincoln High, lace their school cafeteria spaghetti with pills, coke, liquor, and weed, orchestrate locker room orgies, and “make it” with just about every boy to cross their path. The spiked spaghetti leads to the most deliriously lunatic episode in the movie, a wild, drug-fueled food fight, closer to the mayhem of Otto Meuhl and his “Therapie-Komune” in Sweet Movie than your standard school lunchroom food fight.

Returning from The Swinging Cheerleaders is a very pregnant Cheryl “Rainbeaux” Smith. (Stick around for the end credits, in which she appears with her newborn baby.) Smith has little to do in this installment, but still exudes the wide-eyed charm she brought to roles in Lemora: A Child’s Tale of the Supernatural and the softcore musical Cinderella. Jerii Woods is marvelous and the real star Cheerleader this time out. Wonderfully, Eddra Gale, best-known for her memorable film debut as La Saraghina in 8 1⁄2, plays the school nurse, the sort of role typically played by Shirley Stoller or Pat Ast in other exploitation films of the era. And David Hasselhoff makes his feature film debut as “Boner.” Dorsky would collaborate with Revenge of the Cheerleaders director Richard Lerner ten years later, on a much different project, a documentary about Jack Kerouac. However, Revenge of the Cheerleaders is the more fascinating and unexpected collaboration, something exceptionally rare and compelling — a cheerful teen sex comedy, free of neuroticism, voyeurism, or coercion, in which the women make all the first moves.