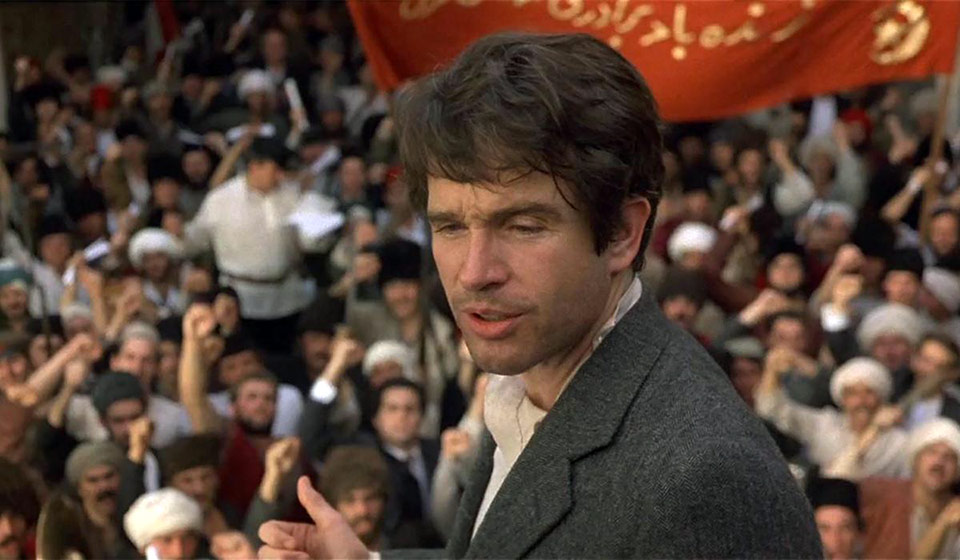 A few short years before Hollywood began pumping out Russo-phobic Cold War action movies like Red Dawn (1984) and Rambo: First Blood Part II (1985), an extremely unlikely film was released: a big-budget, three-hour-long historical epic about communist intellectuals in love. Warren Beatty’s Reds (1981) chronicles the exciting yet brief life of political journalist and activist John Reed, one of only three Americans to be buried in the wall of the Kremlin. A participant-observer in the Russian Revolution, Reed was present when the Winter Palace fell in St. Petersburg, his account of which made up the book he is best known for: Ten Days That Shook the World. However, while the film follows his involvement in these events and their aftermath in detail, the heart of the story is his relationship with fellow journalist Louise Bryant, who finds her political voice over the course of their on-again, off-again romance.

Beatty is surprisingly fitting as the lead, a handsome moviestar portraying a radical with a lot to prove. A Harvard graduate from a privileged background, Reed undoubtedly had to demonstrate true-believer quality in order to claim a seat at the Soviet’s table, distinguishing himself from his Greenwich Village coterie of artists and armchair leftists. Diane Keaton as Bryant, however, is the beating heart of Reds. Beginning as a bright yet shy presence trying to find her place among intellectualls content with not extending Reed’s beau-of-the-moment much attention, Keaton sells Bryant’s emotional and political transformation into a sharp-witted (and sharp-tounged) feminist who trades artist-society life to work as a World War I correspondent in Europe. The dynamics of their relationship ebb and flow with the history happening around them, and the questions that arise for Bryant are tethered to the political moment as well: Should she take a chance on a life with her one-time lover, playwright Eugene O’Neill (in a scene-stealing performance by Jack Nicholson), a man who wants to be always by her side and finds her perfect the way he is, or navigate the turbulence of John Reed’s world where she has less to rely on but more room to discover what she wants to become? As Bryant watches the love of her life make his way through the crowd of exalted Soviets as the October Revolution comes to fruition, it’s impossible to imagine not wanting to take a leap to see what’s on the other side.

What makes Reds so surprising as a big-budget Hollywood picture (aside from the fact that it was produced at all) is how seriously it takes its subject matter and its characters’ politics. The film acknowledges how the factionalism of the early twentieth century Left is certainly humorous at times (Bryant bursting Reed’s bubble by pointing out there’s no meaningful difference between his party and caucuses and those of his political rivals feels frustratingly familiar if you’re in a leftist organization today), but the debates that occurred among the various communists, anarchists, et al who populated this milieu did inform organizing for a century to come, as well as articulated political horizons that we’re still chasing. Beatty plunges the viewer into these arguments in smoke-filled taverns and meeting spaces and makes you feel the stakes in them. To follow these figures as they watch history unfold in ways they awaited longingly, but at the same time, had little way of predicting is thrilling.

It feels lazy to examine every work of art I engage with right now through the lens of the specific moment we are in, but it also feels impossible not to. Watching the lives of Reed and Bryant morph from seemingly endless conversations about strategy and political consciousness, or leisurely writing and performing plays in their cottage home, into being at the center of massive historical events, I could not get Lenin’s famous line out of my mind: "There are decades where nothing happens; and there are weeks where decades happen.” Right now, it feels as though decades have come to pass very quickly, but the seizing of the reigns of history is denied to us as our collective responsibility demands we stay inside. Is this the result of this specific set or circumstances, or did Reed’s peers feel a similar lack of agency as they pontificated about the revolutionary action happening close to their hearts perhaps, but geographically across the globe? Perhaps the closest analogues we have to our day-to-day experiences are the elderly commentators sprinkled throughout Reds. You may recognize some of them: there’s Henry Miller and Rebecca West, Roger Baldwin (founder of the American Civil Liberties Union), the journalist Adela Rogers St. Johns, but many are various socialist organizers and artists who are far less remembered in the movement. Beatty refers to them in the film’s credits as the “Witnesses”; they preserve some sort of link to the past, recalling Reed, Bryant, and their comrades and how they were seen, adding texture and historical perspective. But more importantly, they’re very normal. They gossip, they misremember, they crack a lewd joke here and there, and they are who, along with the John Reeds of the world, make history.