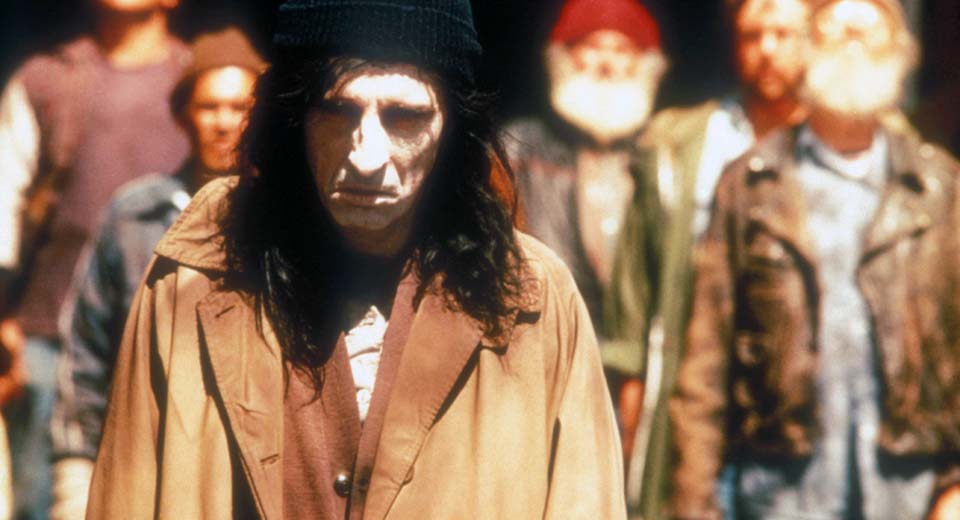 Only in a career as packed with full-tilt bangers as that of John Carpenter could Prince of Darkness be considered a relatively overshadowed work, and yet the 1987 scifi-tinged occult thriller might be the movie where the various fantastical throughlines, narrative devices, and tropes of his filmography most completely intersect. The plot concerns a group of university researchers who converge upon a small church in Los Angeles where a priest (Donald Pleasence, in his third and final film with Carpenter) has uncovered a large, mysterious vial of swirling slime. Theology and theoretical physics combine to determine that the ooze may be the essence of Satan himself. Meanwhile, it slowly dawns on the students that they're being confined into the church by a millenarian-cult-like band of “street people” (silently led by Godfather of Shock Rock Alice Cooper)—and that as the vial begins to leak, some of the fellow students might not be quite themselves.

In some ways, Prince of Darkness plays out like a Carpenter greatest hits: it combines the claustrophobia of Assault on Precinct 13 and The Thing with the latter’s apocalyptic dread and the conspiratorial underpinnings of They Live. The plot, which alludes heavily to the work of Nigel Kneale (Carpenter wrote the film under the pseudonym Martin Quatermass, a nod to Kneale’s iconic scientist), eventually snowballs into a heady brew of esoteric theology, secret societies, shared nightmares, mirror portals, broadcast transmissions from the future, and even aliens. But it’s more or less a pretext for a non-stop, freewheeling house of horrors, including a man whose body is folds into a mound of gore and cockroaches, generous slime vomiting, and a student who develops Freddy Krueger-like disfigurations and telekinetic powers. There is a lot going on.

It may come as no surprise that the very thing that keeps Prince of Darkness from being truly top-shelf Carpenter is that, despite the film’s intensely confined physical scope, the plot is ludicrously maximalist and patently nonsensical without attaching itself to the kind of strong central protagonist that Carpenter traditionally excels at—the kind of roles memorably embodied in other films by Jamie Lee Curtis, Adrienne Barbeau, Kurt Russell, Roddy Piper, and Sam Neill. And yet that drawback should still be considered relatively minor: by any standard measure, Prince of Darkness is a hell of a film, and pitch-perfect Halloween-eve viewing. It remains, in both modern horror and Carpenter’s filmography, essential viewing.