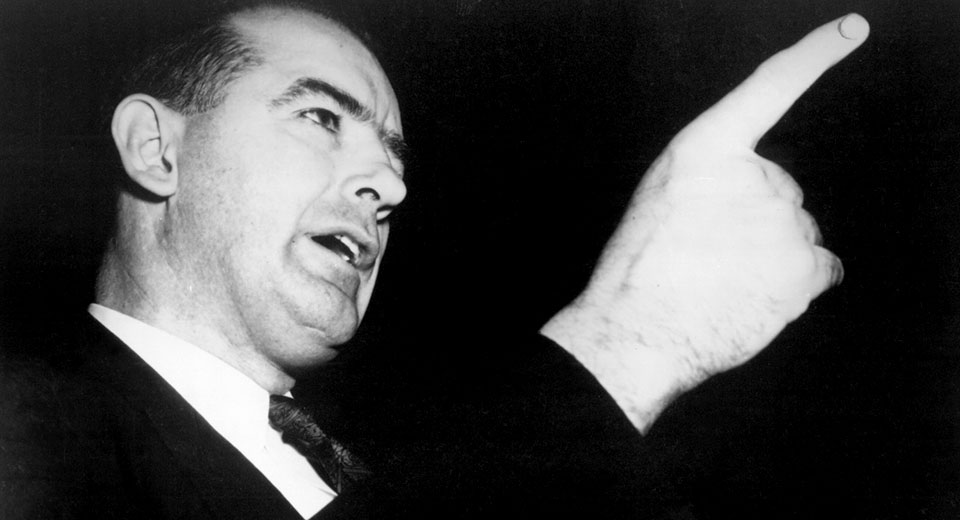 The Army-McCarthy hearings, held from April 22 to June 17, 1954, were broadcast on live television in near entirety and watched by an estimated 80 million American viewers. A decade after their conclusion, Dan Talbot and Emile de Antonio edited down the 180 hours of footage into the 97-minute documentary Point of Order!, screening tonight at MoMA in 35mm as a part of their "Public Imaginations: A Survey of Documentary Form" series. This snapshot of the hearings is presented without commentary beyond headings like "Charge and Countercharge" and relates, with brilliant editing, what has come to be the definitive narrative of the Army-McCarthy hearings.

Point of Order! provides a helpful overview of the hearings' details, but its educational value lies most in what it demonstrates about the time period's deadly prejudices and a certain rottenness at the core of American government. This country's obsession with Communism and the devastation that obsession wrought in the lives of so many gives an almost unendurable weight to exchanges like the spar between McCarthy and Army counsel Joseph N. Welch, in which McCarthy named a young staff member of Welch's as a former member of a pro-Communist group and implied, all with a sickeningly smug grin, that Welch himself was thereby sympathetic to the cause—to which Welch famously responded, "Have you no sense of decency, sir?" Simultaneously on view alongside rampant Red Scare paranoia is a disturbingly flippant homophobia displayed by all three parties represented; such intimations of homosexuality within the government were similarly damning and became intertwined with the destruction committed by McCarthy's subcommittee in the years to come.

Point of Order! begins with a graphic representation of a television screen, which opens on to the footage of the hearings; the important figures are introduced as "The Cast," each shown in stills accompanied by rather absurd representative statements, like dull catchphrases from a poorly scripted sitcom. Throughout the documentary, each of the senators, counselors, and army men speechifies in the style appropriate to his rank and in the accents of his regional background, reading out a patchwork of political performance that puts the pageant-like nature of American democracy forward. I was reminded of this film during the recent impeachment hearings, a similarly tedious display of repeatable-to-the-point-of-meaningless quotes from Presidents-past and bizarre party-pleasing asides, all of which insisted, without fail, on the historic importance of the goings on. The legal phrase "point of order" refers to "a query... as to whether correct procedure is being followed"; what this film so damningly demonstrates and has been so often affirmed is that all of this is, simply, procedure.