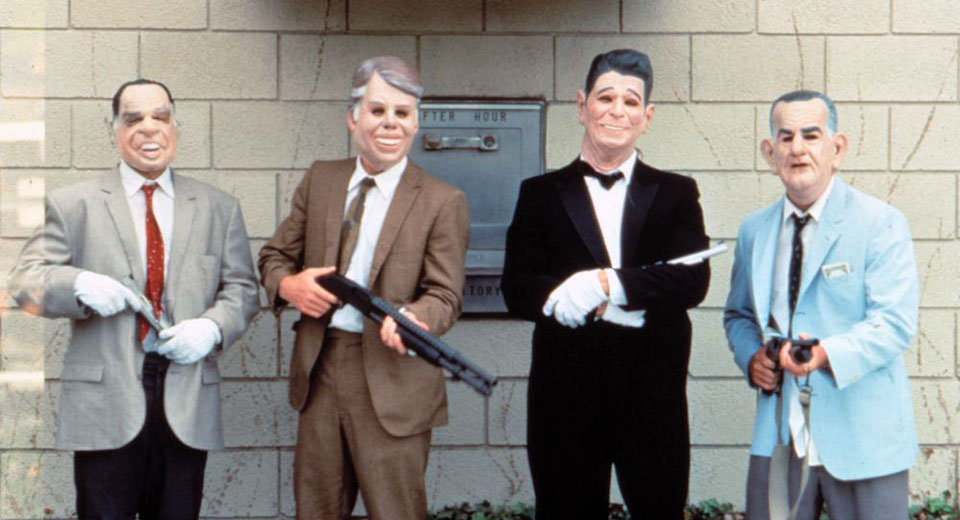 Point Break  is so legendary that any introduction to it is bound to be superfluous. Telling someone about it as if they’d never heard of it is a bit like what I had to do this morning when a visiting Japanese friend told me that he wasn’t familiar with John Huston. I said, “He’s the guy who made Treasure of the Sierra Madre and The Asphalt Jungle”—which both prompted silent, expectant stares—“and of course The Maltese Falcon.” When this last didn’t produce the expected Aha!-Erlebnis, I knew I had wandered into an alien land, a foreign cultural topography where the mutually recognized landmarks are absent. I’m hesitant to bring up Point Break with him for fear of finding myself further estranged from a man who’s scheduled to sleep on my couch for a week.

Assuming, then, that you’re at least glancingly familiar with Kathryn Bigelow’s ambiguously ironic bank heist caper Point Break (1991), I’ll make a couple of observations about its two main characters. Keanu Reeves plays Johnny Utah, an ambitious rookie FBI agent, “Young, dumb, and full of cum” and an unrivaled marksman (revealed in a semi-pornographic title sequence that shows him, rain-soaked, blasting targets in slow motion). After transferring to the bureau’s LA field office, he’s immediately sent “deep undercover” to investigate an elusive gang of—yeah, you heard me—surfer bank robbers. Their MO is to disguise themselves as former presidents, complete with latex masks of Nixon, Reagan, Carter, and LBJ. ‘Nixon’ is really Bodhi (who, in turn, is really Patrick Swayze), the spiritual and ideological leader of this gang that—like many of Bigelow’s bands of misfits—is more than merely a contractual, task-oriented team. Like the vampires in Near Dark, whose curse is also their bond, this gang is really a tribe, bound by its members’ determination to live in the folds of nature and rip off the system that’s trying to pollute and destroy it. Whereas the vampires are more akin to a “community of the sick”—note Near Dark’s mid-AIDS crisis release year of 1987—the surfer-bandits are a politico-religious sect, united by their mission (their future) rather than by a shared affliction (their past).

As with his character Bob Arctor in A Scanner Darkly, Keanu’s casting in Point Break is perfect. (One might even argue that Bob Arctor is the logical conclusion of Johnny Utah.) Both are undercover cops (one a fed and the other a county narc), which means that—unlike a straightforward acting job, where you pretend to be someone else—Keanu is, in both cases, pretending to pretend to be someone else. This second-order acting leads to Arctor’s catatonia (paralleled by source novel author Philip K. Dick’s own descent into dissociative paranoia), whereas Utah manages to keep his cool and his characters in order—but only on the epistemological level. On the ethical level, he starts to become confused, gradually convinced by Bodhi’s naturalist proselytizing; his identity remains stable but his allegiance gradually shifts (until Bodhi manages to disillusion him in the classic way by revealing that it’s really all about personal power, petty rivalries, and protecting your own interests).

With unforgettable supporting performances from third- or fourth-order acting Gary Busey and Red Hot Chili Peppers frontman Anthony Kiedis, Point Break is not to be missed this Fourth of July. So throw some all-beef or all-seitan franks on the grill, hide them in your tote bag, and smuggle them into BAM (and leave the relish at home—that’s not proper movie theater etiquette).