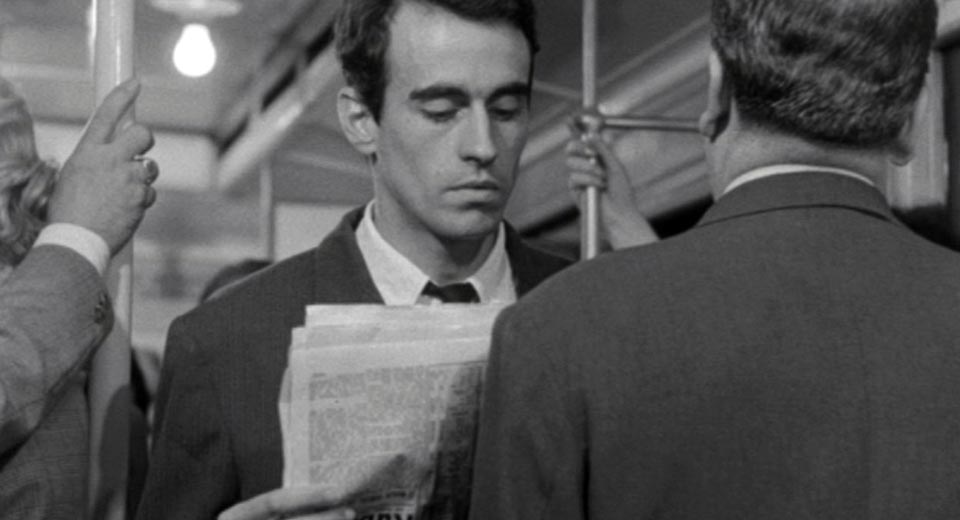 Is Robert Bresson’s Pickpocket (1959) about repentance and redemption? Film scholar Brian Price’s answer is No; the dominant Catholic reading of Bresson’s work has always missed the point that his films are primarily instructional. Pickpocket may be the most obvious example of this.

Much has been made of Bresson’s proclivity for chopping his “models” (not “actors,” who he believed belonged in the theater) into isolated body parts, frequently showing only their hands, torsos, and feet. The same goes for spaces: there aren’t many establishing shots, and Bresson’s black and white films (1943-1967) take place mostly in restricted interiors. In Pickpocket, we see Michel (Martin LaSalle) training in his impoverished garret (like many of Bresson’s spaces, Michel’s hovel evokes the domiciles of Dostoevsky’s gone-to-seed recluses) with a watch strapped to the leg of a table and a wallet in the breast pocket of a hanging jacket. If this sequence evokes the “You talkin’ to me?” scene in Taxi Driver, it’s no coincidence; Paul Schrader, besides writing its screenplay, also wrote a highly influential book on Bresson and considers Pickpocket his single biggest influence.

When Michel receives tutoring from Kassagi (a real-life Tunisian pickpocket who worked as an advisor on the film and was forced to find a new career as a magician after his face became well-known), we get an even more detailed run-through of the thief’s craft (Michel's second accomplice is played by slapstick master Pierre Étaix). For Price, these sequences amount to a master class in “how to live outside of the system of capital.” That’s going a little far, but it’s true that Bresson focuses almost entirely on technique and very little on context and repercussions. For Michel, even prison is not a terrible punishment in itself, but only as a signifier of the deficiency of his skill; he can tolerate the bars and walls, but not the idea that he “dropped his guard.” There’s no moral repentance, only deflated professional pride. As for context, we are told only that Michel does what he does out of “weakness” and “to get ahead,” but both seem unlikely. His half-baked Nietzschean-Raskolnikovian theory about an elite of geniuses sounds like something loosely quoted from Rope rather than something deeply felt.

Maybe Michel is not a “Criminal with a capital ‘C’, an ideological criminal,” as Schrader claims, but an artist, a desublimated magician, a sort of Kassagi in reverse. Price suggests that Bresson’s goal was to aestheticize crime in the tradition of Jean Genet, to “render crime beautiful” (also that the sparingly deployed music of Jean-Baptiste Lully, Louis XIV’s openly gay chamber music superintendent, indicates that Michel and Kassagi’s cautious first encounter is a veiled form of cruising). Whether Michel is an artist or a mere artisan, his obsession with his craft is undeniable. In his line of work, no detail can be missed—both his success and his freedom depend on it.