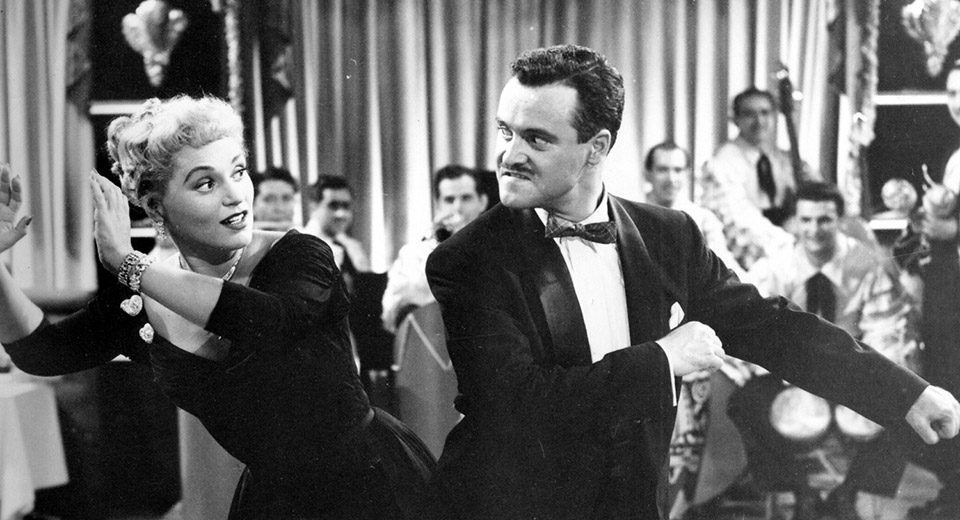 Phffft is, according to a Walter Winchell column flashed onscreen, the sound a marriage makes as it dissolves. The film’s posters acknowledged the difficulty of the film’s title by commanding “Don’t say it - see it!” and in fact no one in the film attempts a pronunciation. It’s impossible to say whether or not the film would enjoy its rightful place as a classic postwar romantic comedy were it not for its unsayable title, but Phffft! (1954) can perhaps find a more comfortable home in our current era of linguistic puckishness in which odd punctuation, dropped vowels and archaic spellings are routinely employed to distinguish everything from lifestyle brands to movies and pop stars. The title is no marketing stunt, though; onomatopoeia makes a surprisingly crucial contribution to the plot and humor. In a film full of charming verbiage adapted by George Axelrod from his own play, nonverbal utterances punch above their weight as mementos of courtship. The whoosh of a mechanical bed and the boing of excitement at a first kiss give better shape to ecstatic romance than saccharine declarations.

After eight years, TV writer Nina (Judy Holliday) and attorney Robert (Jack Lemmon) Tracey call it quits. She’s tired of suffering his condescending ridicule of her career while he cites her mother’s analyst as a meddlesome coconspirator in the estrangement. The two embark on parallel journeys of self-discovery and middle-aged dating: dancing lessons, booze, pet hobbies. Of course the popular entertainment Fates have preordained their reunion, but prior to that inevitability the film ponders the integrity of the self within a longterm monogamous relationship. After parting she attempts to learn French and he tries painting, and both take the rumba class they had planned for years to take together, but neither can outrun the cozy complacency they had enjoyed and hated together. The world outside of their marriage is full of bimbo coed sexpots (a fabulous Kim Novak) and the false hopes of dilettanteism, twin reminders of their expired youth. Nina and Robert belong together, the movie joyfully argues, but modern audiences are left to wonder if that’s such a good thing.

Before she died at 43, Holliday originated the role of Billie Dawn in Born Yesterday on Broadway, won an Academy Award for the play’s screen adaptation, refused to name names before the McCarran Committee and recorded two albums. In Phffft! she tones down Billie Dawn’s famously shrill squawk for a more weightless and lovely cadence. She is a marvel, whether wringing laughs out of failed pronunciations of the French “eu” or drunkenly declaring her desire to bed “millions of men” or delivering what may be the greatest bad dancing ever seen on screen. Her presence was wry and earnest in the same breath, with large, seeking eyes and a prodigious gift for physical comedy. Lemmon would later become the bigger star, but Holliday more than earns her top-billing in Phffft!