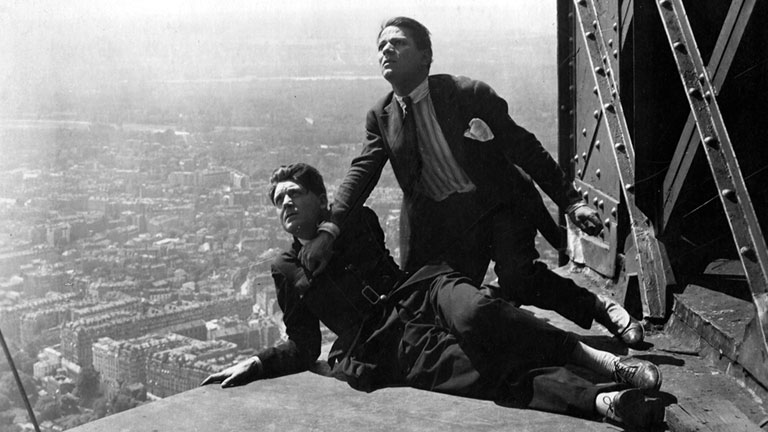 An empty Place de la Concorde, the silent hills of Montmartre, and a Paris depopulated of its vibrant inhabitants form the backdrop for René Clair’s 1925 film Paris qui dort (Paris Asleep). Also known as The Crazy Ray and At 3:25, Clair’s first film depicts a city put on pause after a mad scientist unleashes his aforementioned ray upon the world, lulling humans into an artificial slumber. Existing in formats of various lengths and qualities since its release, including a 36-minute version Clair re-edited in 1971, this 59-minute film was restored by the Fondation Jérôme Seydoux-Pathé in 2018 based on the English language version from 1925 conserved by the BFI, and is now available to stream courtesy of the Cinémathèque Française.

To watch the film now, of course, triggers a wave of uncanny recognition, as our cities have quickly come to resemble Clair’s surreal vision of a world frozen in time. At first, it appears only one person has survived — Albert, the night watchman of the Eiffel Tower (Henri Rollan). Jokingly introduced as the person with the most “elevated” position in the city, Albert was indeed high up enough to evade the ray’s vast reach. We follow him as he wanders through his sleeping city, overcome by a range of emotions — from shock at being the only person in sight, to grief at what’s become of the world, to stunned laughter at discovering his fellow denizens devoted to “majestic inactivity:” a man asleep on a park bench, a cop pursuing a thief, a cabby asleep at the wheel. He runs toward a man poised to commit suicide by jumping into the Seine, only to find that he, too, has been halted before taking the fatal step. A note beside him ironically explains that it was “the terrible pace of modern life” that drove him to it. “I cannot stand the rush and roar of this city.”

When Albert happens upon a motley crew of Parisians who were also spared the ray’s effects — they were, conceivably, the only people in an airplane at the time — the film’s most dazzling sequences begin. The group crashes a society party, drinking the guests’ wine, stealing their jewels, and conducting one-sided conversations with them as they nod off in agreement. They take the Eiffel Tower as their headquarters and make themselves comfortable, balancing precariously on the structure’s steel beams and platforms high above the city. Clair’s film had an influence on Jacques Rivette’s early work, including Paris Belongs to Us (1961), which likewise features shots of Paris streets largely devoid of people. And at first, it does seem like the city belongs to Albert and his new friends alone: “All the world is ours,” one of them exclaims. “Hector! Hannibal! Napoleon! They were mere tin-pot chiefs compared with us!” While they’re freed from the obligations of everyday life, the crew succumbs to boredom after a mere four days, which “all their wealth could not dispel.” Paris qui dort deftly swings from farcical comedy to class commentary, questioning the purpose of money in a world devoid of people.

The film doesn’t answer the question of whether life is more worthwhile on “pause” or on “play” — it’s more interested in examining what happens to a city when its throngs of people are eliminated from the equation. Clair experiments with documentary footage of Paris’s busiest intersections, from the Champs Elysées to the Place du Châtelet, with still images suddenly bursting to life, then freezing mid-frame as the ray works its magic. It’s almost as if Clair, a first-time filmmaker working in the early stages of the medium, is having as much fun turning the world on and off as the mad scientist himself.