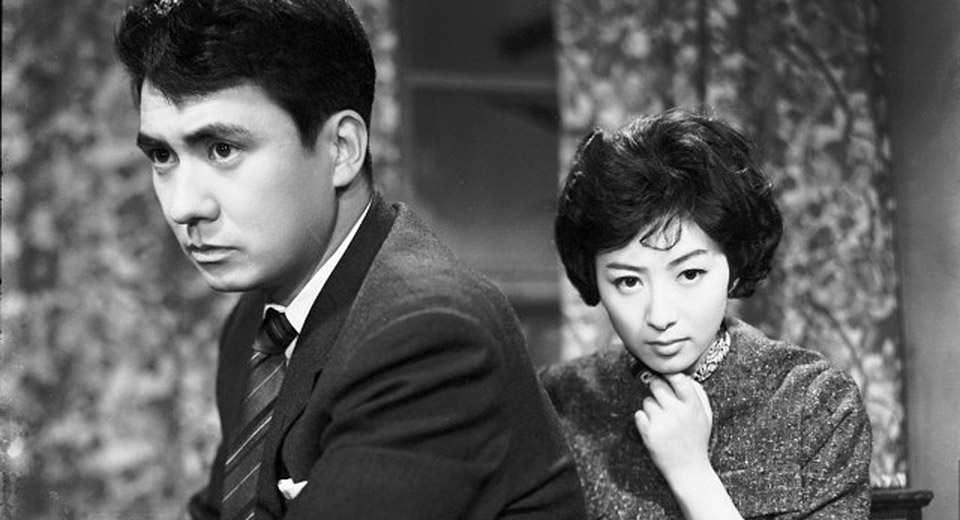 Equally indebted to Ozu-Naruse home dramas and the post-war vogue for sordid crime thrillers, Osamu Takahashi’s Only She Knows is one of the stranger entries in Japan Society’s series ‘The Other Japanese New Wave’. After a cheery credit montage of Christmas time in Tokyo, the first thing we see is a headline tacked to a newsstand: “Rapist-murderer on the loose. Will he strike a fourth time tonight?” Two detectives—Chishu Ryu and Fumio Watanabe—are leading the citywide search for the killer. But when Ryu’s daughter (Akiko Koyama) becomes victim number four—though she escapes with her life—the plot splits, charting the daughter’s despair alongside her father’s confused professionalism.

Though its compact, 63-minute running time was likely dictated by the studio, the result is as emotionally dense as it is economical. Shots of the detectives prowling around the city (on a crowded bus, in a quiet neighborhood, asking questions in a gaudy apartment) alternate with claustrophobic scenes of trouble at home. Playing yet another variation of a stoical father, Ryu in particular excels at these, but from Mitsuko Mito, who plays his obstinate wife, to the rookie cops sleeping on the desks at Police H.Q., the rest of the cast conveys a similar image of unapologetic tenderness in the face of agony.

Tenderness may have seemed retrograde to a decade that liked to equate cruelty and detachment with newness. But almost 60 years later, Takahashi’s movie feels more honest, and less self-consciously “radical” than the early achievements of his better known peers. It’s tempting, then, to think of Only She Knows as an example of a middle way between the conventions of Ozu’s generation and Oshima’s barn-burning early-60’s polemics. But that short-changes a sensibility that approximates neither, and seems to be looking for something entirely its own.

Somewhat typical of the group of young directors that had initially been granted new freedoms by the major studios, Takahashi’s directing career was short lived. After two more features, he eventually moved on to writing novels—with Only She Knows becoming largely forgotten as a curiosity of the nascent “New Wave”. That it’s screening now, as part of a reappraisal of that entire period, feels right; Takahashi's movie provides clear proof of the quality and stylistic variety that can be found beyond the Oshima and Shinoda films that have already received their due.