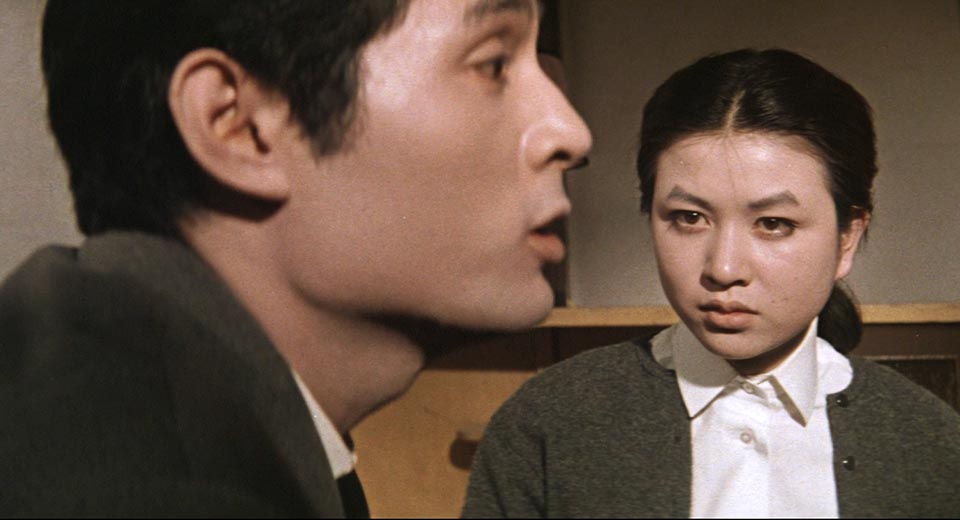 Kon Ichikawa’s Odd Obsession (1959) is a black sex comedy, but lest that bring to mind the burlesque romps of Lina Wertmuller, I assure you there’s a much more temperate sensibility at work here. Despite its taboo themes of geriatric lust, adultery, and group suicide, it’s still more Ozu than Woody Allen, sprinkled with raunch but without straying far from the tasteful confines of a Japanese domestic drama.

With a diagram of the human nervous system behind him, the young Doctor Kimura (Tatsuya Nakadai) explains that we begin descending into senility at the shockingly young age of ten. “No one can escape physical senility, not even you,” he says with a smirk and a fourth-wall-breaking index finger before stepping forward into diegetic space and taking Mr. Kenmochi’s blood pressure. Although this flippant form of direct address doesn’t recur, its effect is to make us imagine how each of the characters’ ailments would feel (cerebral anemia, diplopia, hemispheric paralysis), not to mention the treatments, some of which look more painful than the conditions themselves. Exempli gratia, an expert in acupuncture and “moxibustion” is summoned to alleviate Kenmochi’s high blood pressure with harsh percussive massage and black-ops-style neck cracking, which just makes Kenmochi’s condition worse and eventually leads to a mid-coital stroke.

The generally lighthearted exposition of Kenmochi’s attempt to rediscover his virility is dotted with truly painful moments, as when he reveals his advancing dementia by forgetting his boss’s name at a party. The averted glances of the embarrassed guests are as good a way as any I’ve seen to generate deeply-felt sympathy for a character.

Odd Obsession is based on a novel by Junichiro Tanizaki, who indulged his obsession with interior design in a 1939 essay on Japanese aesthetics, In Praise of Shadows. In it, he laments the modern vogue for Western-style electric lamps and white-tiled bathrooms, both of which are prominent in the Kenmochi household. I don’t know whether or not these elements are present in the original story, but they work as a subtle metaphor for Kenmochi’s futile search for new stimuli.