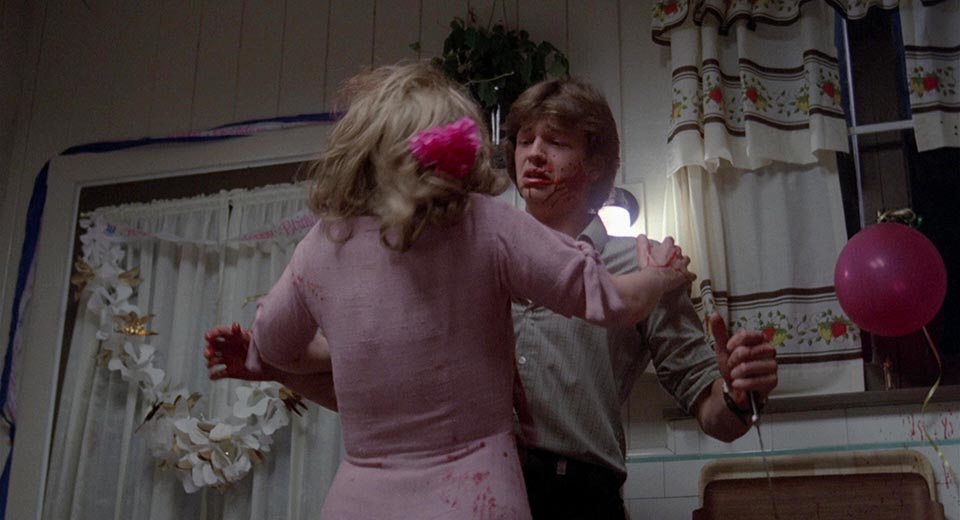 The first fifteen minutes of William Asher's 1982 slasher Night Warning (aka Butcher, Baker, Nightmare Maker) include a car's brakes faltering on the ever-treacherous Highway 1; decapitation by fallen timber log; said car flying off a cliff, landing in a lake, then bursting into flames; and a glimpse of a truly deranged expression on beloved American actress Susan Tyrrell's face. All of which is a fitting prelude to the gory, cringingly tense madness to come.

Tyrrell, in an unforgettably unhinged performance, plays Aunt Cheryl to young Billy Lynch, left an orphan in her care by the unfortunate automobile accident of the opening sequence. Jumping forward to Billy's impending try-outs for a college basketball scout, which threaten Aunt Cheryl with a lonely, unacceptable future, a barely-eyebrowed Tyrrell awakens from a mumbling sleep to snoop through Billy's wallet, where she finds a very displeasing condom—not, we quickly learn, because she is morally offended, but because, as she later tells Billy, "I am going to be your date tomorrow night. Sorry!"

With its blatant references to various classic oedipal nightmare precedents (including an early scene of Aunt Cheryl talking excitedly to some candles while rocking furiously in her ill-lit basement), a delightful cameo by a very young Bill Paxton as Billy Lynch's bully, and a creepy old gothic house with a rat-infested attic (Why is this so often a thing in the movies? Don't people care that they have rats?), Night Warning might have been a fun but average horror flick. Add to this an effective low-budget soundtrack, jars of already-ominous pickled eggs featured so conspicuously in every shot of Aunt Cheryl's kitchen, Tyrrell's frightful wig, and a stomach-churningly evil homophobic cop, and the film crosses into truly singular territory.

Notable for its wholesome cast and crew—including sitcom stars Jimmy McNichol and Julia Duffy, and director Asher, known for his seminal work on I Love Lucy and Bewitched, Night Warning is also still on the UK's list of banned "video nasties." A succinct exercise in suspense that serves as a potent indictment of the toxic, hypocritical morality stifling the small town that hasn't seemed to notice Aunt Cheryl's bonkers behavior for the past 14 years, it is an underseen gem.