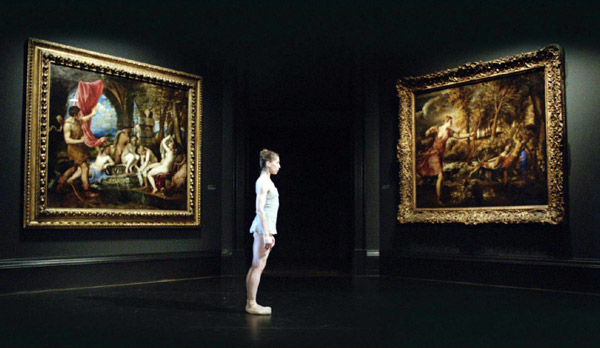 Frederick Wiseman’s National Gallery focuses on London’s publicly-owned museum which houses 2,300 paintings, including major works by Rembrandt, Leonardo, Turner, Van Gogh, Caravaggio and Vermeer. The film shows us many paintings, and also a lot of people looking at paintings, with only the sounds of creaking floors, an occasional cough and hundreds of rustling winter coats, mirroring the experience of public space peculiar to museums, where people look at each other as well as the art.

National Gallery administrators argue over how to navigate the museum through the treacherous territory of public relations—what they are really talking about is a museum’s place in the world. A PR person argues for more engagement with all sectors of the public through methods she can’t quite articulate specifically, but which include using the facade of the building as a screen for a giant cross-promotional video projection having something to do with sports. The museum’s director would “rather not have us going towards the lowest common denominator, as it were,” and is more content to rattle off the provenance of paintings in the collection, by way of dukes, regents and lords, some of whom he knows personally. Meanwhile, the massive workload of the museum goes on: there are programs for schoolchildren, teenagers, teachers, the blind, adults and babies. A guide tells a group of mostly black high schoolers how the museum’s founding was tied up with slavery, and another explains to a group of blind people how the touch painting they are learning about is an expression of the painter’s anarchist belief system. Greenpeace activists scale the museum’s facade to hang an anti-BP banner reading “It’s No Oil Painting #savethearctic”.

Away from the public, another wing of the museum houses those who meticulously clean away layers of yellowed varnish, retouch damaged areas and otherwise work to preserve paintings, overseen by scientists who ensure that these activities will not cause physical harm. A preservationist displays a large x-ray of Rembrandt’s “Frederick Rihel on Horseback”, showing another, nearly finished painting underneath. Is the design on Rihel’s boot supposed to be there or, more likely, did an overzealous early preservationist clean away too much and reveal the sleeve of the figure underneath? Restoration is fraught with disagreement over whether a painting should be treated as “an image that you read” or “a document with archeological value.” Artists themselves frequently added tinted varnishes over an entire work to deliberately mute the overall color, but preservationists still remove them in order to reveal the “real” painting underneath.

Wiseman’s films feel comprehensive, impassive and authoritative, though, as Wiseman likes to point out, all films are biased and manipulate by design. National Gallery’s wide-ranging and intricately arrayed material – from institutional machinations to the work of guards and ticket takers, adds up to another of his characteristically sardonic meditations on human beings.