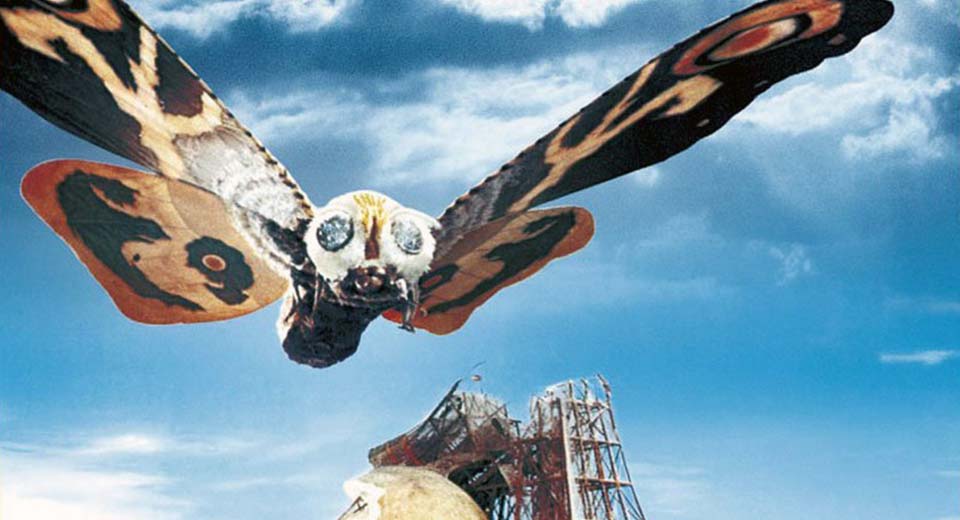 Does being a monster also mean you have to be a villain? This question is alive inside of so many creature stories, and maybe no filmmaker dealt with this on as large a scale as Ishiro Honda. Deploying his monsters as gateways for atomic-age social allegory, Honda also, from Godzilla onward, knew enough to play them as both terrorizer and victim, able to rain destruction on Tokyo one moment and—once the missiles start launching—receive all of our sympathy in the next.

Though the title insect-god would become more flamboyant through the years, in Mothra her mission is almost somber: beat away the colonizers at any cost. Isolated from the scourge of Western civilization, Mothra’s home of Infant Island soon becomes the site of choice for atomic tests, and once the leaders of the free world discover that (whoops) people actually live on this island, industrialist evil-doer “Clark Nelson” (an ‘Americanized’ Jerry Ito) sees dollar signs after he stumbles on two tiny ladies in the jungle (Yumi and Emi Ito, singing duo The Peanuts). Nelson pulls a King Kong and kidnaps the girls to Tokyo, forcing them to sing in a bizarre/beautiful musical revue—and everyone’s pockets are good and lined, until the “Little Beauties” began calling to the protector of their island . . .

Though Honda takes his time getting the monster on screen, and even more before she makes her full evolution from within a cocoon on Tokyo Tower, what he does give us in that time is just as important: the total lack of scruples the ‘civilized world’ has in mowing down indigenous people if they stand to make a buck. Mothra’s tiki-chic/brown face vision of Polynesian natives is, uh, difficult (the ‘savage ritual’ which awakens the monster from her slumber is exotica album cover worthy), but, problems and all, Honda’s intentions here are sincere. Even as Mothra lays waste to two major cities, there is never a question where our sympathies are supposed to land—if your heart doesn’t sink when the creature gets atom-rayed, there’s no hope for you.