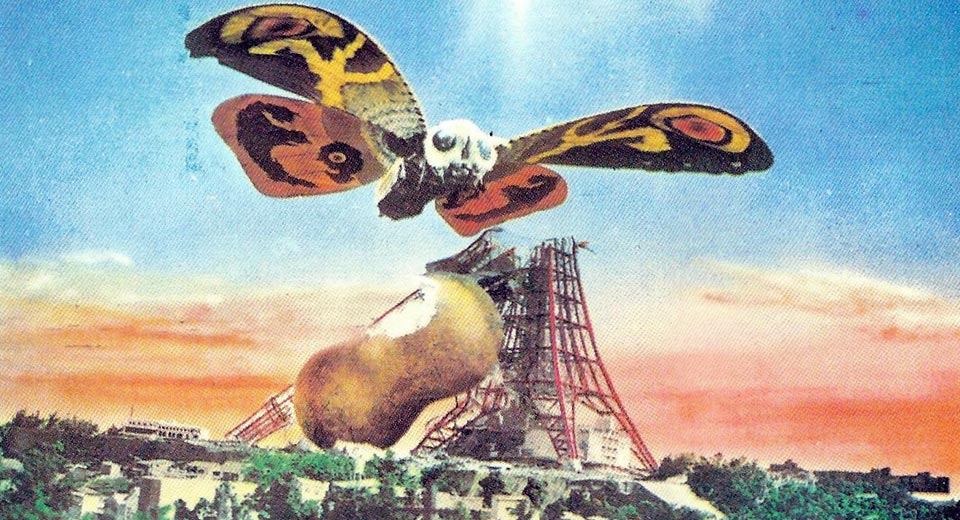 BAM's series "Ghosts and Monsters: Postwar Japanese Horror" continues tonight with the colorful majesty of Mothra. In Ishiro Honda's 1961 Toho film, a terrible storm strands a group of sailors on an island in an atomic testing zone believed to be uninhabited. Once rescued, the sailors reveal there is a native tribe living on the island. Furthermore, the rescued sailors show no evidence of atomic contamination. A group of scientists, a greedy businessman, and one dogged reporter head to the island to investigate. While there, the investigating party encounters twin fairy princesses. The businessman, in hopes of turning the twins into celebrity cash cows, kidnaps the pair and takes them back to Tokyo. Mothra awakens and travels to Japan to save her two adoring subjects, wreaking havoc on the city until they are set free.

Ishiro Honda, the man who helped bring Godzilla to the screen in some of the monster's most beloved films, had a lifelong interest in the beauty and sanctity of the natural world. His early documentaries and docudrama works, such as The Blue Pearl (1951), focused on small communities and their ties to the land and sea. Moved by the atomic horrors of World War II, Honda then helped to create Godzilla. The 1954 film became the most widely distributed Japanese film up to that point – albeit in a mutilated form – and whet audiences' appetites for large-scale monster destruction. Perhaps the most regal and feminine of the monsters to follow in the wake of Godzilla's worldwide success was Mothra.

Based on serialised novel The Luminous Fairies and Mothra, Honda's film was adapted for the screen by his frequent collaborator Shinichi Sekizawa (Ghidorah, the Three-Headed-Monster, All Monsters Attack). Honda admitted the film's plot was heavily indebted to King Kong. The story was familiar but the scope and beauty of the visual feast Mothra offered, was unprecedented. Eiji Tsuburaya, the iconic special effects genius responsible for bringing the world's most well-known kaiju to life, creates a children's book vision with depth, detail, and masterful control of scale. Tsubaraya's meticulous effects combines with Honda's simplicity to create a work that is both a fairy tale and lean science-fiction potboiler.