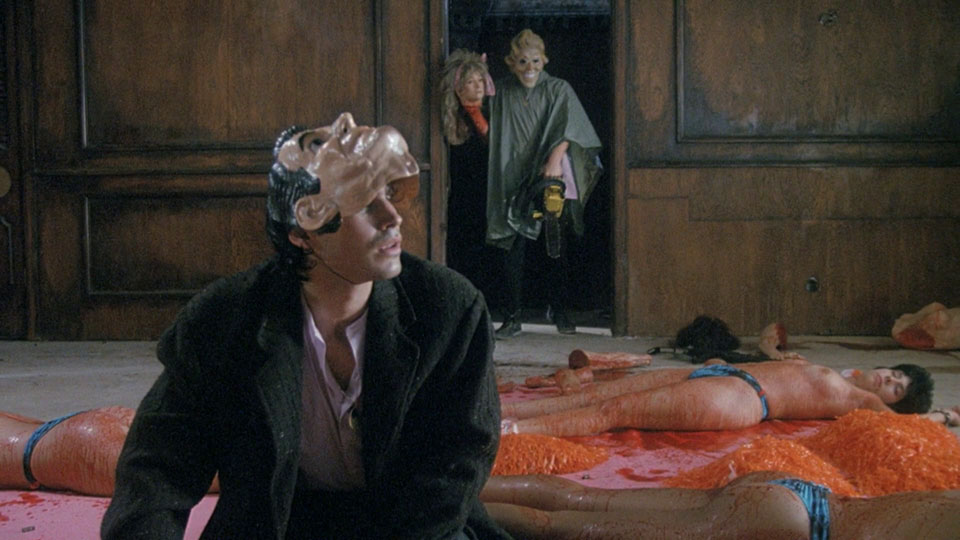 The most I can hope for in taking a chance on an unknown horror title on today’s streaming platforms is that I be shook. Now, shook takes many forms. Shook can be the scaredy-cat jostling that I still pleasurably engage in from time to time, like when my hands darted over my eyes during the recent Shudder-produced, Host, which takes place entirely on Zoom and was shot during lockdown. But there’s a deeper shook, a kind of awe and excitement in finding something that rattles you to your very core — a camp rarity, a topsy-turvy genre cuckold, a feminist auteur you’d never before encountered. The other night, I followed Hulu’s algorithmic guidance and pressed “Play” on the 1987 cult jewel Blood Diner. I was about to embrace all these shooks, and then some.

Blood Diner was written to be a sequel to Herschell Gordon Lewis’s o.g. video nasty, Blood Feast. The latter was released in 1963 and made use of a variety of animal parts to land it in the history books for its unprecedented depiction of gore. I find it rather wooden, by today’s standards, but its lineage is permanent and it even pops up in films like John Waters’ Serial Mom. Blood Feast tells the story of a suburban Miami housewife who commissions a local grocer to prepare an “authentic” Egyptian feast at a party held for her daughter, an anthropology student. That clerk happens to be a descendant of Ramses, and he slinks about town sacrificially dismembering women and harvesting their organs in order to raise the goddess Ishtar. By 1987, production company Vestron Pictures didn’t equate its cult status with commercial appeal, enough to warrant the hefty sum that Lewis requested to return as director, anyway. So they turned to a 24-year-old Asian American female filmmaker named Jackie Kong.

Kong had directed the low-budget slapstick comedy Night Patrol for the company, and its home video rentals broke some kind of record. When approached to direct the otherwise-sober horror screenplay, retitled Blood Diner, she carried her prior production’s tone into her new project. Genre films tend to follow pretty static formulas to ensure success and horror has perhaps the most notoriously rigid audiences. Thanks to movies just like Blood Feast, the male-dominated viewership feels as if “they’ve seen it all.” From the first beat of Blood Diner, I was hooked; I had never seen anything like it! Kong’s film is wild, with a gleefully excessive tone that’s one part New Wave, one part Looney Tunes. Her handle on the genre is masterful and she still delivers the bounty of horror scenes and gimmicks that her audience craves, but on her own terms.

TUTMAN is a thriving vegetarian restaurant on Hollywood boulevard run by two very hot brothers. Foodies are lining up around the block to savor what they’re whipping up, which, of course, is human remains. They’re disciples of the black magick rites taught to them by their uncle Arwan. Only Arwan was killed in a police shoot-out 20 years prior. The Arwan that directs the boys through their most gruesome chores is the excavated brain with eyes still attached that bubbles its thickly-accented directives out of a jar. There’s a Nazi wrestler. There’s a topless aerobics class that the brothers shoot up and dismember while wearing Nancy and Ronald Reagan masks. A woman gets decapitated after having her head smeared in dough and dumped in a fryer — a human hushpuppy with earrings still attached. The MPAA refused to rate the film, allegedly on the grounds that it possessed no moral value.

Blood Diner was made for $300,000 and everything described above should play out, as I’m sure it sounds on paper, like a cheap-looking schlock fest: tawdry frames filled with tits and gory money-shots. But Kong was a born cinephile — she received her first 16mm camera from Marlon Brando as a gift for her 18th birthday. You catch wind of that real fast — Blood Diner has a startlingly opulent (and technically competent) mise en scene; I’ve sat through a million low-budget films — I can tell when someone knows their shit. These frames are carefully composed, with theatrical lighting, dynamic set design and professional cinematography. Dolly tracking shots and crane takes, an impeccable depth of field… in a movie called Blood Diner? What is this!? Look closer and you see that the menus for the diner are the scratch-and-sniff “Odorama” cards from John Waters’ Polyester. Filling this wild and unruly farce are knowing winks from its auteur, which allow for Kong to push its giddy camp to a near-breaking point, beyond basic gallows humor. That balance is absurdly difficult to get right. And Kong nails it.

Streaming this thing, I was slack-jawed. One threshold arrives when Kong pushes her world into the beyond by casting a scripted character as a bulging-eyed dummy, a crude little stuffed mass in a cowboy hat, who delivers his lines through ventriloquist voice-throwing as he’s questioned by our glamorous beat cop, Sheba Jackson (LaNette La France), who resembles a young Janet Jackson (and was, by trade, Janet’s actual hairdresser). A confident Black female detective in the middle of this white horror scenario? Did I mention that Kong’s production crew was almost exclusively female?

The food piles up in gross heaps of fried fingers and eyeballs in olive bowls. An obese diner named Vitamin projectile vomits onto adjacent customers and turns back to refill his mouth from a new dish in front of him, puke still collecting down the front of his Hawaiian shirt. My mind drifted to similarly spasmodic scenes of food grotesquery, like the Viennese Actionists in Dusan Makavajev’s Sweet Movie, or the rancid concoctions prepared by Jayne County in Rosa Von Praunheim’s City of Lost Souls. The kinship with this latter title really set me on a course and led me to realize I was watching a punk movie! Digging deeper, I discovered that the budget restricted that the cast be exclusively non-actor. Kong found her performers in local punk bands! Which is why I mistook the movie as a New York feature in its first act, until an establishing shot landed us on Hollywood Boulevard. Los Angeles punk is horribly underrepresented, at least where narrative cinema in concerned.

The brothers are building a female Frankenstein in order to resurrect an Egyptian goddess named Sheetar, who will commence her reign of matronly terror. She’s gold and, of course, has great breasts. And this absolutely bonkers film reaches its climax in a punk club, where a virgin sacrifice takes place in plain view of a crowd, busy moshing to a performance by a band fronted by a singer with a massive pompadour. His backing instrumentalists are dressed like Hitler, with nooses swinging around their necks. The music cuts to Wagner. Sheetar has risen!

Because of her gold-painted skin and a massive vagina dentata tracing from breasts to genitals, I dizzyingly lose myself in an ürtextual screen fantasy and start to read Sheetar as the Los Angeles punk performance artist Johanna Went, who would perform in similar venues with elaborately cartoonish sets, power tools and animal entrails. Sheetar’s outfit does closely resemble one of Went’s costumes, recently exhibited at the Los Angeles gallery The Box. I don’t think Went ever actually performed at the East Village hot spot The Pyramid Club, but I rewrite this scene as that inevitable moment – when West Coast Art Punk invades East. The man crooning in the pompadour is John Sex, obviously. A Pyramid Club staple, who wore a natural blonde bouffant that towers just as high as our film performer. In addition to his Hitler band, he performs on stage with some blue-bobbed female dancers, who could well be Sex’s back-up dancers, who were known as The Bodacious Tatas. My Sheetar/Went roars to life and bolts of lightening blast through her fingers and Sex’s head explodes. Johanna Went was too much for the boys of The Pyramid. The crowd becomes a teeming mess of zombies, devouring one another. And L.A. assumes its place of rule on the cinematic punk throne. It took a deliriously trashy piece of work like Blood Diner to do it, but I really do appreciate Hulu, and Vestron before them, and the sensationally underrecognized efforts of trailblazer Jackie Kong for finally setting the record straight. And so I became, in my coastal parlance, hella shook.

This piece is excerpted from Because Horror, a collection of 13 essays (incl. one poem) published by DL Press + Semiotext(e) that mixes critical writing and memoir to explore horror movies and how they haunt memory. Available here.