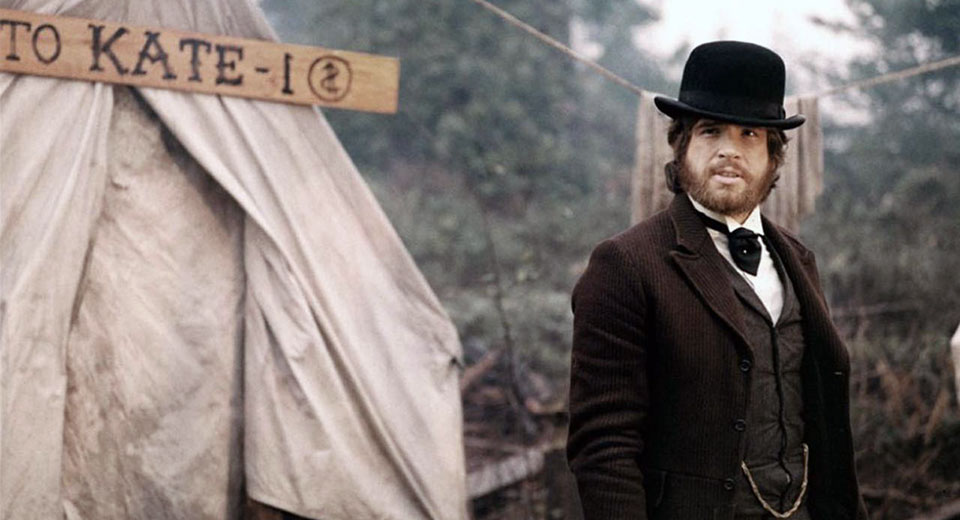 McCabe and Mrs. Miller (1971) is almost entirely about money. It’s 1902. Itinerant businessman John McCabe (Warren Beatty) arrives at a backwoods trading outpost in Washington state to open a brothel, of which Mrs. Miller (Julie Christie) becomes the "classy," British-accented madame. When the dialogue doesn’t revolve around various prices ($2 for a “good” bottle of whisky, 25¢ for a night at the hotel, $80 for a horse) it’s about wages and other costs (15¢ per hour in the mines, $10 per foot to blast tunnel, $50 fine for the death of a Chinese laborer). Scarcely five minutes pass without a reference to money; the film is almost as relentless as Brecht’s Rise and Fall of the City of Mahagonny in pursuing the theme of the brutal pursuit of profit. But unlike Brecht, Altman never indulges in Marxist pedagogy; the cure for this morally bankrupt world is never revealed to be collective struggle by the exploited. Or is it?

I used to think that Altman was an incurable cynic and misanthrope, but just a few days ago I was convinced otherwise. What seems like a callous disregard for the audience is actually confidence in its curiosity. For McCabe and Mrs. Miller, the sound was recorded on sixteen tracks simultaneously, which makes most of the dialogue unintelligible. For someone like me, straining my attention not to lose the narrative thread, this can be frustrating. But it can also be liberating. According to cinematographer Vilmos Zsigmond, Altman wanted the feeling of a loud bar. “You don’t need to hear everything people are saying to know the world they’re living in,” he told actor René Auberjonois. This is the secret of Altman’s approach: narrative clarity is absolutely secondary to atmosphere and feeling. He attacks schematic plots, what Alexander Kluge has described as the “dictatorship of the probable,” and builds worlds instead.

The construction of the world of McCabe and Mrs. Miller is made visible in the film itself. The movie was shot in sequence, so we get to see the simultaneous development of the set and the mining outpost it represents. Altman recalls, “All of the carpenters … actually lived in the place and they were all hippies;” according to actor John Schuck, “We got behind schedule … because the guys were throwing away their power tools and wanted to do everything by hand.” The whole production was imbued with what frequent Altman collaborator Alan Rudolph described as “a democratic sense where everybody was rooting for everybody else” and actor Keith Carradine called “the communal experience of filmmaking” that Altman wanted the cast and crew to share.

Since boredom is an inevitable byproduct in an audience whose attention is only diffusely engaged, Altman’s films can be a struggle to get through. Most of them are redeemed by a single scene or even a single moment. McCabe and Mrs. Miller is notable for having two such instances. Fellow Screen Slate contributor Aaron Schimberg called my attention to the far more subtle of these. At a dreary funeral, the white townsfolk gather in the cold rain to sing a hymn without feeling, expressing little beyond the reluctant fulfilment of an obligation. The town’s only black inhabitants, the barber Sumner Washington (Rodney Gage) and his wife (Lili Francks), exchange a glance of knowing pity, revealing what James Baldwin often claimed was black Americans’ intimate knowledge of their white “compatriots” (who, in turn, know absolutely nothing about them). The second, and more spectacular, is the final battle between McCabe and a bounty hunter sent by the mining corporation intercut with the villagers rushing to the rescue of their church, which is burning down. It contrasts capitalist competition distilled to its barest form—a pathetic scramble for self-preservation—with a collective feat of altruism. Having eliminated his competitors’ mercenary, McCabe freezes to death alone, abandoned even by his partner and only friend. The movie’s ending seems to say, “Let the parasites finish each other off while a community is born.”