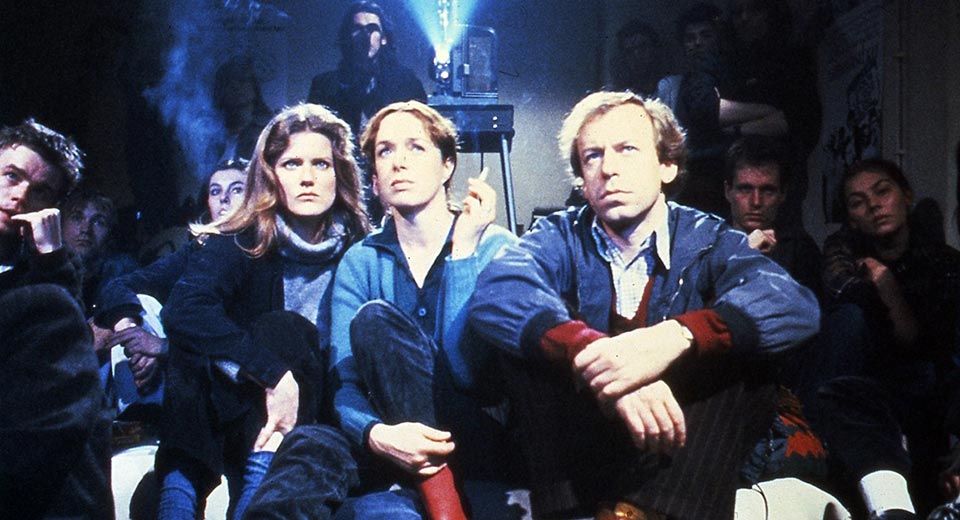 Margarethe von Trotta's debut feature, The Second Awakening of Christa Klages (1978), was her first in a series of portrayals of women with uncommon political courage. Two of these, Marianne & Juliane (1981) and Rosa Luxemburg (1986), star the indomitable Barbara Sukowa, as do von Trotta's two latest films, Vision (2009) and Hannah Arendt (2012), with which von Trotta returns confidently to the theme of her early features, albeit with a different emphasis.

Von Trotta's work in cinema began in Munich, where many figures of the New German Cinema, including Rainer Werner Fassbinder, Volker Schlöndorff, Werner Herzog, Wim Wenders, Reinhard Hauff, Herbert Achternbusch, and Alexander Kluge were based. In 1970 she starred, along with Fassbinder, in Schlöndorff's TV-film adaptation of Brecht's play Baal, a collaboration that would lead to many others. Soon thereafter, she acted in Fassbinder's The American Soldier (1970) and Beware of a Holy Whore (1971), then co-wrote Strohfeuer (1972) and Coup de Grâce (1976) and co-directed The Lost Honour of Katharina Blum (1975) with Schlöndorff. As the names in this paragraph suggest, the German cinema scene was—for all its newness—dominated by men, and the struggles of von Trotta's characters, caught in environments structured for and by men, were paralleled by her own struggles in filmmaking.

With The Second Awakening, von Trotta came into her own and began elaborating an expansive body of work that is now celebrated as one of the highest achievements in feminist filmmaking—though she rejects the label—and that has been said to "offer a glimpse of a post-patriarchal cinema." Whether the feminist label is accurate seems to be beside the point, since von Trotta objects to it on the basis of its ghettoizing and reductive effect, not from an impulse to disavow the historical circumstances from which her preoccupations as a filmmaker admittedly sprang. In any case, there is something in her films not to be found in most contemporary cinema, namely women whose concerns and political engagements go far beyond the private sphere, the domain of reproduction and domesticity, and rivalry over men to which patriarchal culture would confine women's attention.

Though severely criticized at the time of its release by radical feminists for reproducing dominant male clichés and for not creating a decisively different aesthetic, Marianne & Juliane (aka The German Sisters) is nonetheless an exceptional film that devotes all its focus to the relation between two women and the political reality that shapes this relation. More than that, Marianne & Juliane is a document of the tense atmosphere of 1970s Germany, characterized as it was by the proliferation of Leftist armed struggle groups, exponentially intensifying state repression, and the failure of the broader Left to adequately take up the challenge presented by this face-off. Though thinly fictionalized, it is a truthful account of the political and moral climate that prompted the young anti-authoritarians to escalate the struggle against their parents' generation and that gave rise to the univocal reaction against them by the state, the press, and public opinion.

Having known the Red Army Faction's Gudrun Ensslin through her work with Rote Hilfe, a relief group for political prisoners, von Trotta attended her funeral in Stuttgart in 1977, where she met Ensslin's sister, Christiane. She was asking von Trotta and the crew of Germany in Autumn to help convince the cemetery administrators to allow the burial of Baader and Ensslin in the same grave, a request initially met with refusal due to the fact that the couple wasn't married. The administration eventually allowed it and threw in Jan-Carl Raspe as well. The conservative citizens of Stuttgart had tried to prevent their burial in the city's cemetery entirely, but, in a gesture of supreme historical irony, Manfred Rommel, then Lord Mayor of Stuttgart and son of the Nazi field marshal Erwin "Desert Fox" Rommel , refused their requests. It was from this initial conversation with Christiane Ensslin that the script for Marianne & Juliane got its start.

The film's German title, Die bleierne Zeit, is from a poem by Hölderlin and translates literally to "the leaden times." The Italian title, Anni di piombo, is also the phrase used to describe the period of civil war in Italy between the late 60s and late 70s and in this context refers to bullets, but in the Germancontext the lead primarily signifies the oppressive weight of Germany's recent history, the memory of which was laboriously repressed during the postwar era. The reality of increasing state repression and the crushed dream of social revolution had given the Germany of the late 1970s and early 1980s an equally leaden atmosphere, and this is the primary affect permeating the film. An added layer of signification comes from the fact that the grave of Raspe, Baader, and Ensslin was covered with a ten ton lead plate, purportedly to prevent tampering.

For many young people in West Germany, the resonances between the Nazi period and the period of nascent US imperialism in the 1960s, with their silent majorities and their calls to defend the nation against a creeping international threat, were too obvious to ignore. Their responses to this newfound historical responsibility ranged from movements against the war in Vietnam and against German rearmament to the formation of armed groups determined to force the liberal-democratic state to reveal its latent fascism. How do these periods resonate with us today, when US imperialism shows no signs of abating, extralegal prison camps are a part of the normal functioning of states, and a technologically facilitated conformism is spreading to every corner of the earth?