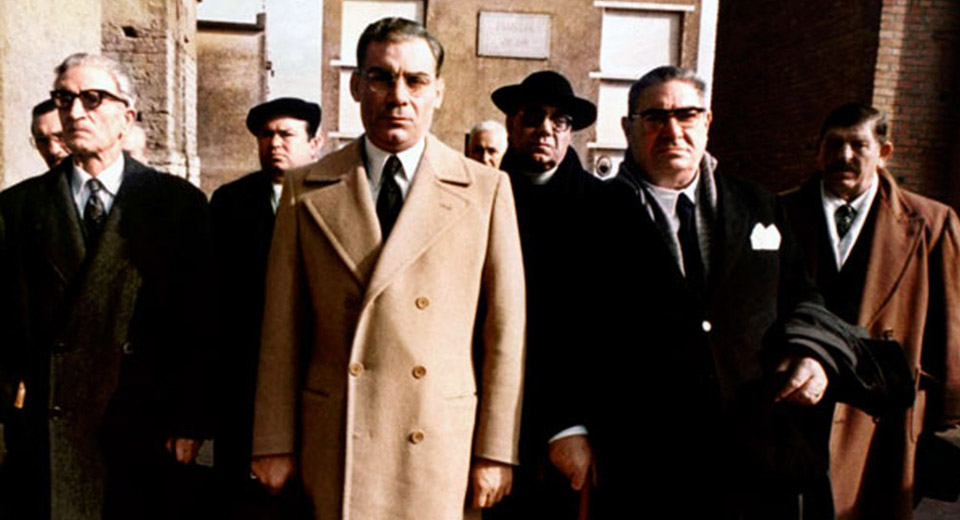 Shifting across decades, Francesco Rosi’s sober gangster epic Lucky Luciano (1973) concerns the eponymous gangster who ruthlessly ascended American organized crime to become the first “boss of all bosses.” Situated almost halfway between the stately pretensions of The Godfather and thumping calisthenics of Goodfellas, Rosi wrings plenty of irresistible cheap thrills from exquisitely staged executions near the film’s opening, but his taste for procedural intrigue focuses the story on the legal and strategic minutiae of organized crime’s international infrastructure.

In exchange for assistance securing New York’s ports during WWII, Luciano’s 30-year sentence for racketeering is commuted under the condition of his deportation to Italy, a “gift” with dire consequences for narcotics officers across the globe. He merely expands his empire in Europe, forging bonds between American wiseguys and the Sicilian Mafia and controlling the means of an international heroin trafficking operation. Gian Maria Volonté plays Luciano with glacial menace, a stoic bureaucrat who’d enjoy organizing corporate layoffs or keeping the books at a concentration camp. Using blankness as a weapon, he locks his mouth in place when not speaking. His narrow eyes seem perpetually scrutinizing on some far-off detail of his empire. Only occasionally does his contempt for the authorities escape his superhuman control and forces itself into a fleeting gesture or half-smile. He has none of Henry Hill’s vitality or Vito Corleone’s gravitas.

Rosi’s wide compositions are often largely empty, paradoxically suggesting the supremacy of Luciano rather than his vulnerability. He governs space without dominating it, insulating himself from the violence that perpetuates his empire while focusing his energy on logistics and political machinations. Volonté and Rosi’s Luciano is the rare screen gangster who can be seen unmistakably for what he is, without the obfuscations of wit, style or tragedy.