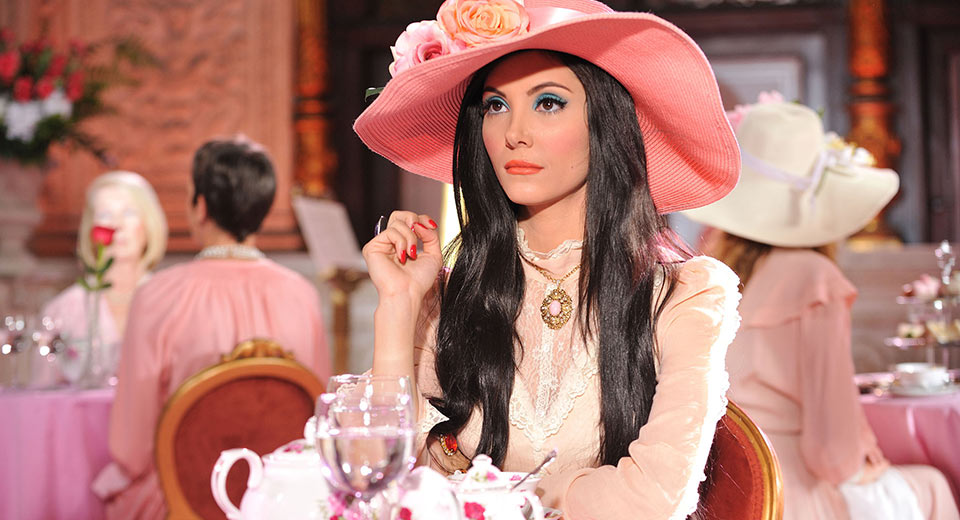 Elaine, the titular love witch, leaves San Francisco after her husband kills himself. She ends up in a small town where a few of her witch friends live, and rents a delightfully decorated room. Elaine’s main goal in life is to find a man that loves her as she loves him – she vacillates wildly between misandry (her belief that men are actually like children) and internalized misogyny, which she expresses by trying to give the men in her life what they want so she will finally be loved. This plan quickly goes wrong, as Elaine’s love potions are too strong, and her lovers are unable to handle their feelings about her, with adverse effects. Elaine joins the ranks of “unlikeable” female protagonists, so self-absorbed she can’t even acknowledge her friend’s grief at one point, but she is still so humanly rendered that you can imagine knowing her yourself.

The film was shot and edited on glorious 35mm, and the colors of the film are incredible. Elaine’s jewel-toned eyeshadows – turquoise, dark purple, black – shine as her prey are hypnotized by her gaze. The landscapes and nature shots are green and lush, and the costumes are colorful and groovy. But don’t mistake The Love Witch for easy irony – though the era-appropriate clothes and sets (all designed and created by Biller herself), not to mention attitudes, offer a few laughs, the film plays it pretty straightforward. Witchcraft is treated with respect, as a religion, an art, and a science, rather than all Satanic rituals and blood sacrifice. And I can’t remember a film so reverent about a woman’s bodily fluids!

The Love Witch is a self-assured film – at 2 hours, it takes its time getting where it’s going, with each scene confidently staged to slowly show the scope, and danger, of Elaine’s power. Genre film fans will have fun counting the influences (lead Samantha Robinson’s striking resemblance to cult star Edwige Fenech stood out to me), but even those with no sexploitation experience will enjoy this beautiful, funny, thoughtful film.