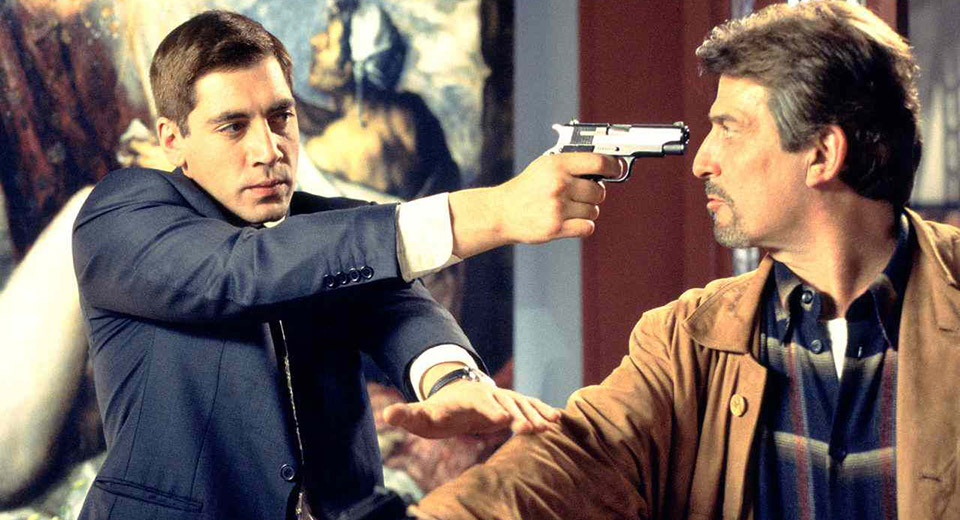 Live Flesh represents something of a transitional film to Pedro Almodóvar’s more austere and emotionally sincere melodramas of the first two decades of this century. While not devoid of oddball character details and quirky plot non-sequiturs — a lengthy prologue details one character’s Christmas Eve birth on a public bus solely for the bizarre punchline that he gets to ride the bus for free for the rest of the movie and his life — the film is a far cry from the irreverent glamour of Almodóvar’s early post-Franco works or even the shrill campy media satire of his previous feature Kika.

Three cuckolds obsessed with vengeance and two scorned adulterous wives form the vertices of Live Flesh’s constantly shifting triangular romances. David (Javier Bardem), an ex-cop who was crippled while on duty and went on to become a wheelchair basketball superstar, is married to Elena (Francesca Neri), the wealthy owner of a children’s shelter. Elena is being stalked by Victor (Liberto Rabal), a recently released ex-con who caused David’s injury six years earlier while harassing Elena for refusing to go on a second date with him, and who now hopes to woo Elena with his fantasies of endless love-making. Add to this David’s alcoholic ex-partner Sancho and his distraught wife Clara, who was formerly having an affair with David and is now sleeping with Victor, and you’ve got one screaming mess of a melodrama.

Almodóvar pitches the histrionics at a volume ripe for parody, yet ensures we are strung along through graceful performances and a vibrant color palette that mesmerizes us into accepting these absurdities as an emotionally heightened reality. Like Douglas Sirk’s vibrant Technicolor weepies that milked harsh social drama to pinpoint the ironies of America’s belief in Hollywood fantasy, Almodóvar deploys these carefully calibrated telenovela-esque screaming matches to illuminate the contradictions and absurdities in Spanish machismo and sexual possessiveness.

When David first confronts Victor in Victor’s dilapidated slum house, his death threats and warning punch to Victor’s groin are rendered inane and pathetic as soon as the local soccer team scores a goal on television and prompts the two of them into a shared victory dance. Later on, as we’re crying at all the hysterical heartbreak and ridiculous violence, it may do one well to think of the absurdity of these compulsive screams of joy amidst a moment of confrontation and admire Almodóvar’s sly wink to the preposterousness of such socially programmed reactions.