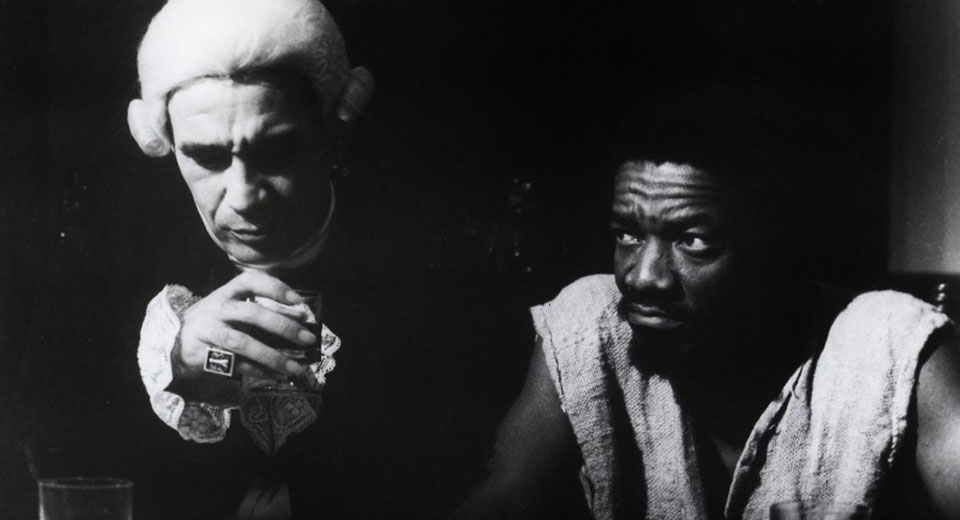 Alea’s earlier landmark film, Memories of Underdevelopment (the first post revolution Cuban film to be screened in the United States) utilizes a number of techniques to create an open, discursive cinematic experience opposite the homogeneity of Hollywood fiction. The Last Supper achieves its particular disruption more slyly than this, being what can best be described as a post-colonial My Dinner With Andre.

In The Last Supper, a count (Chilean star Nelson Villagra) visits his sugar mill in late 18th century Havana during the Christian Holy Week and stages a recreation of the Last Supper with twelve of his slaves. This grotesque scenario makes up the overwhelming body of Alea’s film. In the darkened dining room, the count, in Christ’s seat, spouts perverted Christian rhetoric tailored to the interests of the colonial oppressors. The goal, ostensibly, is to teach the slaves about the Christian faith. As the Count’s explanation of Christian doctrine and philosophy confronts the violence and brutality slavery necessitates, though, the whole project is revealed to be a ghastly farce wherein power disregards force’s incompatibility with faith-based morality.

The action of Alea’s film (outside of the larger scenario which bookends the film) is the furtive shifting of logic and ideology in order to justify exploitation. The slaves’ simplest questioning of their master’s explanations sets loose a baroque web of justifications for suffering and bondage. When the count has exhausted himself with food, drink, and lies, the slaves share their own story. In their creation myth, that of Santeria, Olofi made the universe. There were two figures: truth and lies. After a violent struggle, truth was fitted with the head of lies.