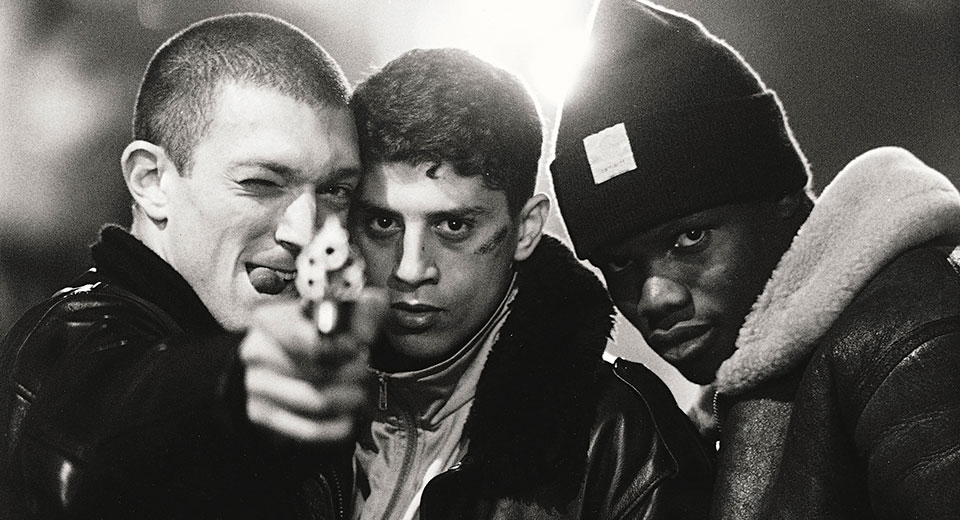 Mathieu Kassovitz isn't exactly a one-hit wonder, but he has yet to one-up his urban Cinderella story, La haine (1995).

Don't get me wrong, there's no diamond-in-the-rough or rags-to-riches stuff in La haine (French for "hatred"). The only element it takes from the fairy tale is the chronology: when friends Vinz, Saïd, and Hubert (Vincent Cassel, Saïd Taghmaoui, and Hubert Koundé) get too bored in their heavily-policed housing project in the Parisian suburbs (or banlieues) and go into the city to collect a debt from a nunchuck-wielding tweaker named Asterix, a run-in with evidence-planting undercovers makes them miss the last commuter train at midnight, mooring them in the hostile city for the night. After trashing a bourgeois art opening ("La malaise des banlieues," the gallerist laments), trying to take a cab with a stolen credit card, and attempting to hotwire a Citroën, they settle on smoking hashish and philosophizing. Hubert, the most politically conscious of the bunch, tells Vinz a joke that functions as the film's central metaphor: A man falls out of a skyscraper, and with each floor he passes, he thinks to himself, "So far so good, so far so good…" French society is collapsing, but no one will admit how bad it is until there's nothing but rubble left.

Beyond the Republic's founding "Liberty, Equality, Fraternity" motto—which the protagonists dismiss as a platitude—"Frenchness" enters only rarely into their milieu's cultural consciousness, dominated as it is by Glocks and Desert Eagles, Yamahas, Cypress Hill, and American sportswear. A neighborhood DJ syncs Edith Piaf with KRS-One, Saïd does an uncanny Belmondo impression, and the last scene features an inexplicable massive mural of Baudelaire, but integration has clearly not been a runaway success.

Bringing a lot of anthropological-colonial problems with it, the word "raw" is commonly applied to La haine (at least by The LA and NY Times, The Economist, and The Guardian), but the film is actually much closer to the "cooked" end of the spectrum. Not a single shot feels impromptu; rather, Kassovitz and cinematographer Pierre Aïm are almost too in control. You'll be left scratching your head over how they managed to dolly over Vincent Cassel's head to the mirror in front of him while remaining completely out of sight, and the last "Oh no they didn't!" cliffhanger dolly shot is sheer eye-candy for alumni of the Tarantino school of cooler-than-thou camera technique.

Alongside the charismatic central trio, Kassovitz has peopled his world with memorable minor characters, like the little old man with an anecdote about shitting in the woods on the way to a Siberian labor camp, and the recently divorced drunk who helps our heroes evade grand theft auto charges by dancing on the hood of the pursuing squad car.

La haine is over twenty years old, but because the antagonism it identifies has only gotten more acute, it feels much more recent. We're still falling past the skyscraper's windows, but the pavement is getting closer and closer.