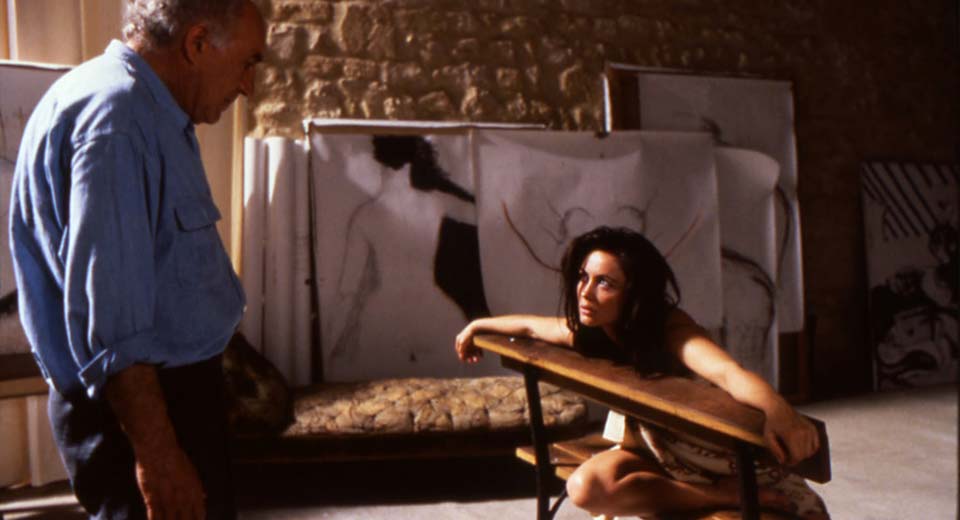 Describing La Belle Noiseuse is a little like trying to find the words to talk about a perfume—at four hours long, it is more of an experience than it is, simply, a movie. You could begin by describing its spicy top notes, the fact of what it is on the surface: Nicholas, a young painter (David Burztein), and his girlfriend, Marianne (Emmanuelle Béart), visit the chateau of an aging painter, Frenhofer (Michel Piccoli), who is inspired to return to his abandoned masterpiece, "The Beautiful Troublemaker," if he could just use Béart as his model.

Then there are the middle notes, the earthy nutmeg-and-coriander heart of the film: The stunningly beautiful Chateau d'Assas, where Frenhofer and his wife Liz (Jane Birkin), the original model of "The Beautiful Troublemaker," have found a careful way of living together. As Marianne and Frenhofer retreat to Frenhofer's studio (where, by Roger Ebert's guess, Béart is "entirely nude for at least an hour in this film"), Liz and Nicholas offer some sort of consolation to each other in being the ones left behind.

Finally there are the base notes, so deep that you don't feel them creep up on you at first, but so intrinsically there that afterwards you wonder how they weren’t immediately obvious. La Belle Noiseuse is, at its core, a film about process rather than results. It is about the hours spent contorted uncomfortably, the sketches that get rejected and thrown on the floor, the people you hurt in your obsession and frustration. Whatever the final product may be (and it may very well be a masterpiece), it will always be secondary to the passion of creation. As they say, pleasure and pain are not so different a feeling.

Jacques Rivette is oftentimes a deeply funny director, but he is concertedly not in La Belle Nouseuse, where even in the nude Béart's most captivating feature are her intensely dark and drilling eyes. If you make the wise decision to trek to the Museum of the Moving Image today for this film, be warned that La Belle Noiseuse will get on your skin and follows you out of the theater, as deeply haunting as the stare of an unknown women in a painting, as simultaneously revealing and mysterious as the bottle of L'Autre perfume on the Frenhofers' counter.