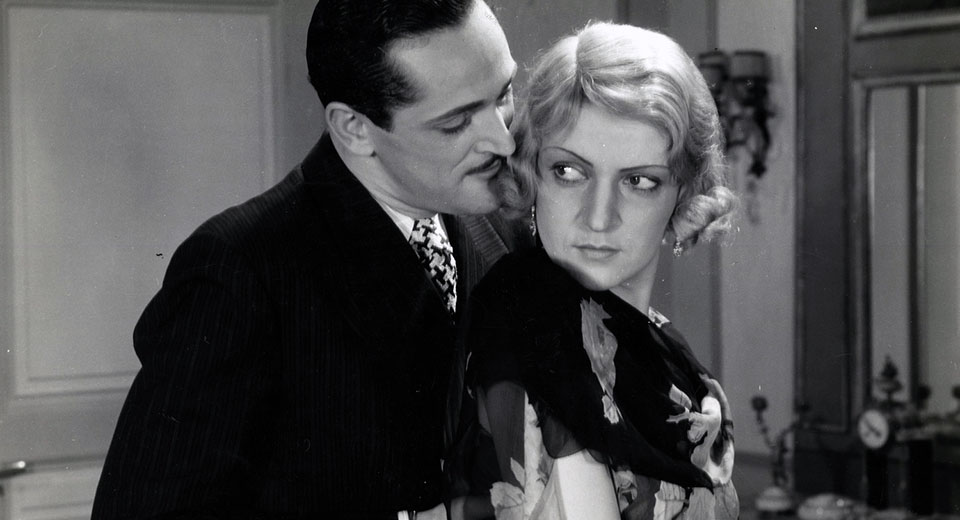 At To Save and Project, MoMA’s 17th annual ode to film preservation, among rescued gems from the likes of Michael Curtiz and Raoul Walsh can be found two works by unknown French auteur Louis Valray. All but forgotten since abandoning cinema after three unsuccessful features in the 1930s, Valray might now enjoy a bit of renown that his gifts for rhythmic storytelling and directing actors should have inspired decades ago. Of particular interest is La belle de nuit (1934), a deeply affecting melodrama embellished with innovative editing schemes.

When Claude (Aimé Clariond), a successful Parisian playwright, discovers his wife Maryse (Véra Korène) in the arms of an old army buddy, he banishes her from their home and heads to the coast to clear his head. There he stumbles upon Maïthé (also Korène) a prostitute with an uncanny resemblance to his estranged wife. Naturally, he coopts serendipity and enlists his wife’s doppelgänger in a revenge scheme that requires her to impersonate Maryse and resume the affair. Then, at his moment of triumph, Claude will reveal to his betrayer that he’s been sleeping with a prostitute, thereby ruining the man’s reputation and self-esteem. Cursed by memories of being used and discarded as a young maid to a bourgeois family, Maïthé has developed a bone-deep loathing for men and eagerly executes the plan until Claude’s younger protégé arrives in town and melts her icy heart.

Valray wrings an impressive amount of emotional fireworks from this potentially ludicrous plot. Given the narrative conventions surrounding fallen women, Maïthé is clearly bound for tragedy, but her inner life is the richest and most sympathetic of the film’s small cast of characters. Valray takes her position as plaything to the swells seriously, to devastating effect. A scene of her awkwardly running (think of the polar opposite of Tom Cruise’s piston-armed sprints) through a forest in heels denudes her of the vanity usually sacrosanct for lead actors. That this haunting moment is intercut with two wealthy men discussing her fate within their hateful game unbearably amplifies her tragic arc.

Valray deploys impressive visual and sonic bridges to propel the film forward in a chain of interlinked scenarios. Doubles abound: a character glances at his watch, which dissolves into the image of a grandfather clock overlooking characters in a new scene; one set of shoes cuts to another; a dog’s whine segues to a train whistle. The effect is relatively simple, but it binds Valray’s disparate strands (gritty street scenes, broad comic sketches) into a unified whole worthy of rediscovery.