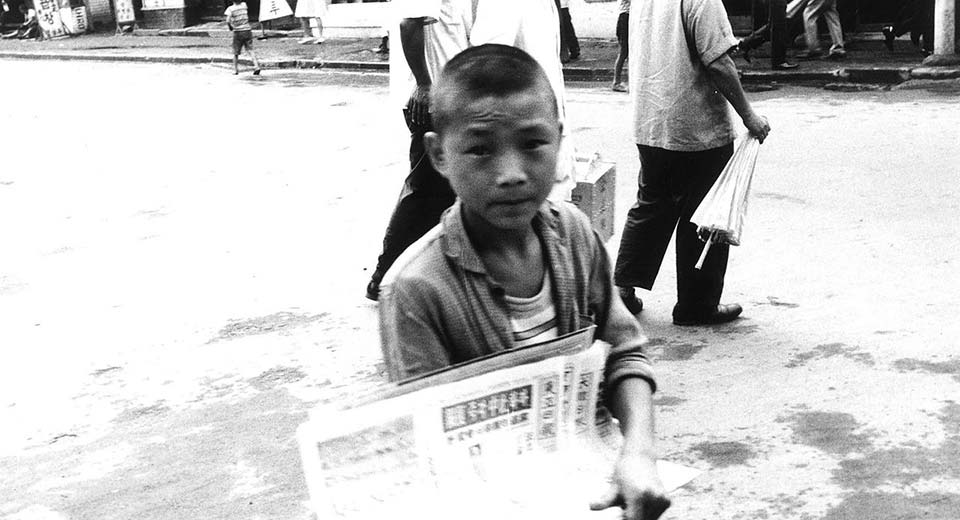 Tonight, Anthology Film Archives continues its Documentarists for a Day series with a rare pairing of nonfiction offerings from Nagisa Oshima that reveal an introspective side to the famously outspoken political filmmaker. Made in 1965 and 1991 respectively, the two stylistically divergent short works bookend Oshima’s career from the height of his filmmaking powers as a New Wave firebrand to an internationally recognized elder statesman of Japanese cinema who nevertheless had to look overseas to find financing.

Diary of Yunbogi is one of several short documentaries and narrative feature films Oshima made in the 1960s that deal with what he called Japan’s “Korean problem,” referring to the country’s tangled history of occupation and the ongoing discrimination against Koreans living in Japan. Made up of still photographs of street orphans in South Korea that Oshima took during his first trip there a year earlier, the film uses a dual voice over narration consisting of diary passages of a 6-year-old boy named Yunbogi (a published best-seller at the time) and Oshima’s own poetic, questioning direct addresses to him. Positioned as a Japanese outsider looking in, Oshima works through his inherited national guilt while suggesting some hope for Yunbogi’s future, and all of South Korea, in its potential for youth-led revolution.

Kyoto, My Mother’s Place, made twenty-five years later for British television, again utilizes Oshima’s own questioning narration, this time as a visitor and half-reluctant guide to the city of his birth and Japan’s former capital. Clad in a kimono, Oshima walks Kyoto’s scenic vistas while his voice over provides a mixture of Japanese history, information about Kyoto’s customs, and his own personal history. It’s initially an ironic sight given Oshima’s strongly critical stance on Japanese traditionalism, but he wastes no time in making pointed observations about the oppressive nature of Japan’s traditions, especially for women and his mother. While repeatedly saying he hates Kyoto, he nevertheless acknowledges it shaped his life, work, and aesthetics—and his kimono. This kind of insider/outsider duality marked Oshima his whole career as both one of Japan’s greatest critics and one of its most visible international representatives.