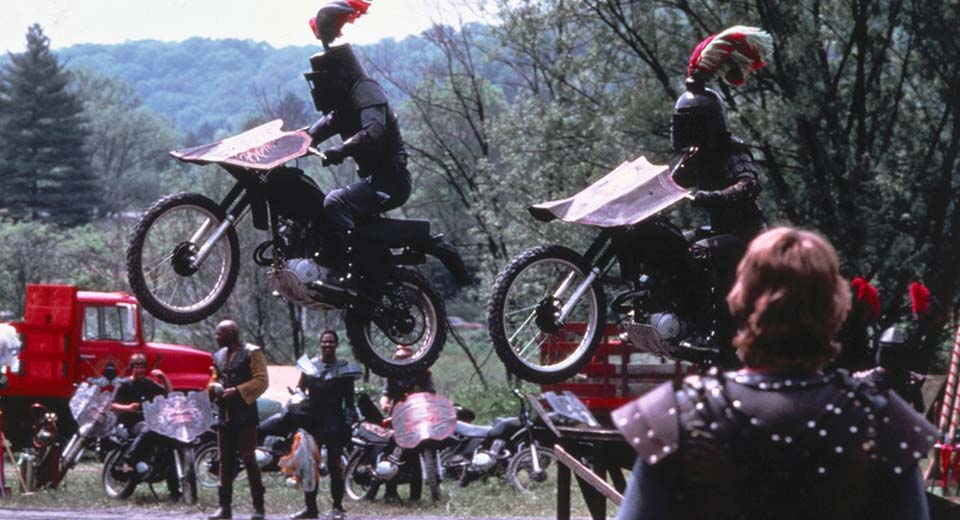 Since George Romero had struck box office gold with Dawn of the Dead (1978), he had a bigger budget and more control over his next feature, Knightriders (1981). The Nation's Robert Hatch gushed that it was "blessed with originality," but not everyone was pleased: Pauline Kael dismissed it as "inept," and Variety attacked it as "the most egregious case of auteurist self-indulgence since Heaven's Gate." Hostile or friendly, most reviewers recognized its singular combination of medieval fantasy and post-60s rebel mystique and its ability to take a political position without being self-righteous.

Lutes and pipes play as a king and queen bathe in a magical forest glade then mount their steed—a Honda CBX 1000. These are Billy (Ed Harris) and Linet (Amy Ingersoll), the first couple of a medieval pageantry troupe that roams rural Pennsylvania performing jousting tournaments on dirtbikes. The crowds are often meager, but the point, it turns out, is less to entertain than to live by "the code," which Billy enforces with a zealot's conviction. Other team members include eager beaver Alan (Gary Lahti), bad boy Morgan (Tom Savini), and the troupe's one female combatant, Rocky (Cynthia Adler). Their loyalty to their self-flagellating leader is shaken when smarmy promoter Joe Bontempi (Martin Ferrero) shows up offering bookings in Vegas. Alan and Morgan jump ship in pursuit of mainstream success, but illusions shatter faster than collarbones and soon the defectors are back and eating crow. The hatchet is buried and the show can go on.

The cast members have such great chemistry it feels like you're hanging out with a real group of close friends. Many are longtime Romero collaborators: Ken Foree, the troupe's logistics man, was the star of Dawn of the Dead; special effects artist Savini was also in Dawn and later directed the 1990 remake of Night of the Living Dead; and the girl mechanic Angie is none other than Romero's then-wife, Christine Forrest.

In the early 80s Romero complained about the "McDonaldization of America," so it's no coincidence that Billy's climactic confrontation with the local sheriff is set in a corporate fast food establishment. Although Romero lays on the popular justice a little thick (every last mom and dad in the place cheers when Billy beats the shit out of the cop and locks him in the freezer), it really feels good, like when Rock Hudson pulverizes the racist diner proprietor at the end of Giant (1956).

Knightriders is streaming for free on many services (Updated October 2020)